Why We Need a National Climate Bank

Over a dozen states already reap the emissions-cutting, job-creating benefits of green banks. Now, lawmakers see massive potential for one at the national scale.
August 27, 2021

If you’re like most people who don’t work in finance, the thought of banks may not exactly get the heart racing.

But in the fight to stop rising temperatures in the very short window we have left to avoid the kind of lasting and devastating changes scientists are screaming about, banks have a critical role to play. In particular, what’s known as green banks or climate banks are essential parts of making the society-wide just transition to clean energy we need go from lofty ideal to actual it’s-happening-now reality.

So as Congress starts working on the massive budget bill that represents our one last shot at major climate legislation in the US in time to make a difference, green banks and specifically a national climate bank has to be part of the package.

Across the US, in states of all sizes and political stripes, green banks are already making a difference. These institutions are helping:

Now, seeing their success at the subnational level, members of Congress and President Biden want to establish a national green bank.

According to experts, doing so would help the US meet its goal of reducing overall emissions by at least 50% by 2030 below 2005 levels. Crucially, this would also increase underserved communities’ access to clean energy, energy efficient housing, and other environmental improvements.

So, how do they work?

WHAT IS A GREEN BANK?

A green bank is a financial institution that uses limited public funding to attract private investment in clean energy, energy-efficient housing, and other green projects. By providing financing opportunities, they make green projects more affordable and accessible to consumers, ultimately increasing their uptake.

Well, consider this: For people in disadvantaged communities, one of the main obstacles to installing rooftop solar or undertaking energy efficiency retrofits is the high upfront costs of these projects.

Moreover, by turning to a green bank, they can receive a loan that covers 100% of the cost of the project at a low enough interest rate that their investment would lower their costs of electricity, even including the cost of repayment of the loan. This is a win for borrowers, for the green bank, and of course, for the planet.

As we describe in our e-book Where We’re Going and How We Get There Together, one of green banks’ primary objectives is to “demonstrate viability to more traditional private sector debt and equity markets.”

In other words, a common objective for green banks is showing regular banks that clean energy projects, building energy-efficiency retrofits, and other low-carbon investments can provide significant returns.

In terms of their structure, green banks can be:

As far as funding, the initial money green banks use to invest and grow usually comes from governments, but in some instances may also come from philanthropy.

A (VERY) BRIEF HISTORY OF US GREEN BANKS

Established by the Connecticut General Assembly in July 2011, the Connecticut Green Bank was the first of its kind in the US. As  describes, it was formed as a part of the governor and legislature’s joint energy strategy to, “achieve cleaner, less expensive, and more reliable sources of energy while creating jobs and supporting local economic development.”

Fast forward to today and there are 21 green banks in states including New York, Louisiana, North Carolina, and Florida. According to the Coalition for Green Capital, government officials, local leaders, and market actors in 22 more states are currently exploring or taking steps to form a green bank! 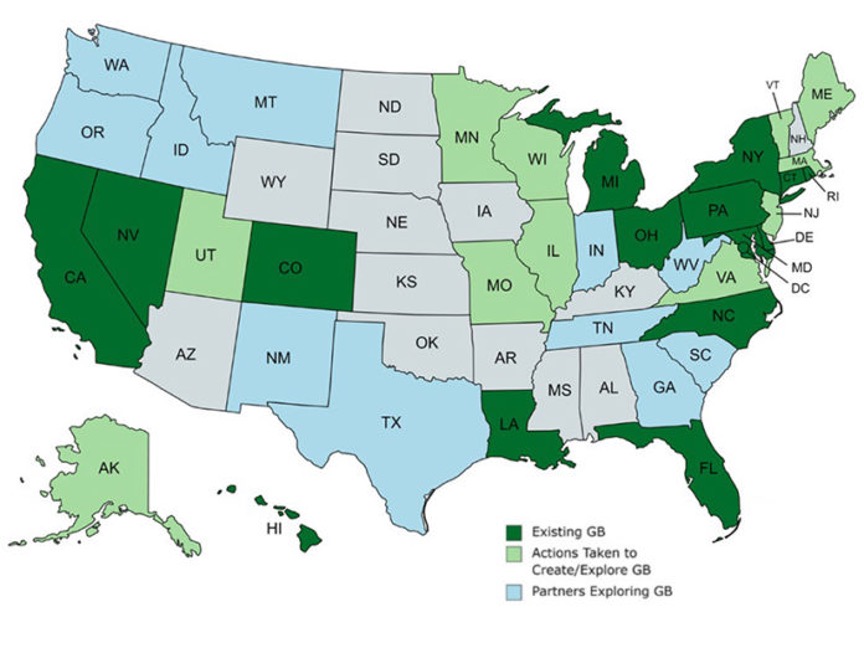 THE IMPACT OF US GREEN BANKS

The rise of US green banks may be relatively recent, but their impact is already noteworthy.

For all the finance gurus out there, US green banks’ mobilization ratio (overall investment/green bank investment) was 3.7 to 1 in 2020. Which means that for every dollar invested throughout the year, $3.70 of overall investment went to fund the US clean energy economy. 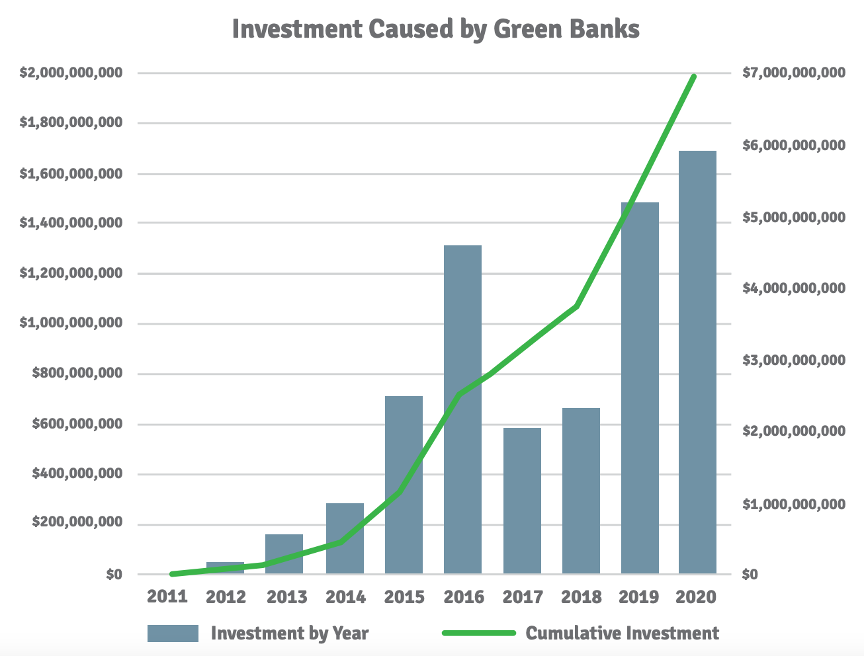 Even amid the COVID-19 pandemic, 2020 was one of Connecticut Green Bank’s most successful years yet. It managed to leverage $36.7 million in public funds to help bring over $312 million in total investment in the state.

Among many, two of Connecticut Green Bank’s projects in 2020 included providing $7.7 million to finance building energy conservation retrofits in low-income communities, and helping finance over 1,000 electric vehicle chargers throughout the state.

In terms of climate, the projects Connecticut Green Bank completed in fiscal year 2020 will help reduce nearly 1.5 million tons of CO2 over their lifetime. That’s like preventing the combustion of 150.4 million gallons of gasoline!

2020 was also a big year for Florida’s Solar & Energy Loan Fund (SELF), an independent non-profit green bank. It saw its lending activity increase by 84% and surpassed $5 million annually for the first time.

SELF grew by 393% over the last three years and completed 2,000 green home improvement projects totaling $18 million — crucially, with 74% of the lending activity in underserved markets. What’s more, its default rate was below 2%.

Connecticut Green Bank and SELF are just two examples, but around the US, the story is much the same: green banks are ramping up their work, and in the process, bringing big climate impact and economic development to the table.

WHERE DOES THE CREATION OF A NATIONAL CLIMATE BANK STAND?

Congressional bills proposing the creation of a national climate bank have come about several times over the past decade. In February 2021, for example, Representative Debbie Dingell and Senators Ed Markey and Chris Van Hollen introduced the Clean Energy and Sustainability Accelerator Act.

According to the Coalition for Green Capital, the $100 billion in initial funding their bill proposed would generate $884 billion in total investment over 10 years. This would be a substantial contribution to the estimated $2.5 trillion the US needs to be on a path to net-zero carbon emissions by 2050.

What’s more, a green bank funded with $100 billion would create millions of jobs — most of them roles that could be filled right away by Americans with various skillsets.

Since the Clean Energy and Sustainability Accelerator Act was introduced, President Biden has endorsed the creation of a green bank with $27 billion in initial funding as part of his American Jobs Plan infrastructure proposal. However, it was not ultimately included in the bipartisan infrastructure deal.

Nonetheless, members of Congress and advocacy groups are still working to make a national green bank a reality via standalone legislation and the forthcoming budget reconciliation package.

Amid legislative twists and turns, however, one thing remains clear: that now is the time to create a national climate bank. Because the idea’s right moment in Congress has come. Because two-in-three voters favor it. And above all, because the climate crisis demands tried and tested solutions like it.

JOIN THE FIGHT FOR OUR PLANET

With ideas like a national climate bank on the rise, a sustainable future is in sight. But we cannot take it for granted. Now more than ever, at this time of immense opportunity, the climate movement needs us.

Tell Congress to go big on climate this fall with a bold budget bill that creates a national climate bank and accelerates the just transition to clean energy we need to prevent catastrophic changes. Time is running out and the coming election year mean this is our one last chance to go big as a nation in time to make a difference.