Climate Change and the Great Barrier Reef: It's in a Great Deal of Trouble

Climate change is one of the greatest threats to the future of the Great Barrier Reef for a few reasons, including rising sea temperatures and ocean acidification.
January 25, 2019

When you think of the Great Barrier Reef, you probably think of its majestic beauty and its marine life – and perhaps that it’s been on your vacation bucket list for a few years (ours too!).

At nearly 1,500 miles long, the reef is home to roughly 9,000 species of fish, mollusks, whales, sea turtles, and other marine life.

But did you know that it’s in a great deal of trouble?

The Great Barrier Reef is under threat because of climate change

Climate change is one of the greatest threats to the future of the Great Barrier Reef for a few reasons. One is rising sea temperatures. Another is ocean acidification.

It’s admittedly a mouthful, but ocean acidification is what happens when the extra CO2 in the atmosphere (think: fossil fuel emissions) dissolves into the oceans and becomes carbonic acid. The result: water becomes more acidic and a lot less friendly to marine life.

So as our oceans become warmer and more acidic, the Reef has suffered. Why? Many coral reefs – including the Great Barrier Reef – depend on the colorful algae that live throughout their nooks and crannies to survive. But when it becomes stressed by warmer and more acidic waters, coral expels this algae and turns white – a phenomenon known as “coral bleaching.” Bleaching weakens the coral and it may begin to starve. Unless the coral has a chance to recover and the algae can return, it can die.

Coral can recover from bleaching, but that doesn’t always happen. In fact, about 30 percent of corals on the reef have died since the 2016 mass bleaching event. The fastest growers might take 10 to 15 years to recover, while the big, mature corals can take decades or centuries, according to Mark Eakin of NOAA's Coral Reef Watch.

Remember how we mentioned that the Reef is home to some 9,000 species of marine life? Each of those species has a job to do in the incredibly complex ecosystem the Reef supports. When sections start bleaching and dying off, food webs experience severe disruption.  These disruptions have ripple effects that can reduce food supplies for the smallest crustacean all the way to larger fauna, like dolphins and whale sharks.

Bottom line: bleaching puts entire ecosystems at risk. Following the 2016 bleaching event, investigators found “complete ecosystem collapse” in some sections of the Reef with many kinds of fish all but gone, as just one indicator of many.

Climate models project that most of the world's reefs – including the Great Barrier Reef – could experience annual bleaching by 2050 if we don’t take action to reduce greenhouse gas emissions globally. 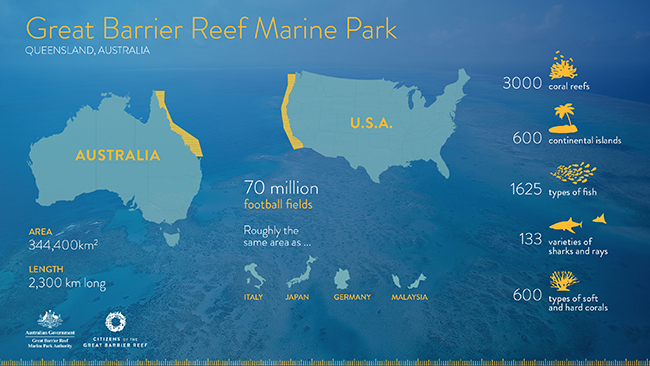 The Reef Affects the Economy in Australia, too

The danger of a dying reef goes far beyond losing natural wonder and ecosystems.

The Reef supports fisheries, contributes 6.4 billion to the Australian economy annually, helps employ more than 64,000 people, and brings tourists – over 2 million a year – from around the globe to see this World Heritage Site, especially in the Whitsunday Islands and Cairns regions.

The conclusion is obvious: if we’re going to save the Great Barrier Reef, we must act on climate, and we must take action now. Not in 20 years or 10 years or even five. Now.