The Climate Crisis and Flooding: What You Need to Know

While hurricanes and earthquakes can grab attention and headlines, floods and droughts are actually some of the most dangerous natural disasters.
January 14, 2020

Climate change is having a clear impact on the way water moves around our world. Record-breaking floods are one prime example of how our lives have been transformed by the climate crisis. But there’s no doubt that the levee is breaking when it comes to climate action, too.

A Warmer (and Sometimes Wetter) World

Simply put, climate change impacts our weather largely by putting our water cycle into overdrive. As temperatures around the globe climb, water from land and sea is evaporating faster – leading to more intense precipitation events and intensifying storms.

More water in our atmosphere means more intense precipitation and more intense storms. It’s called a cycle for a reason.

And it might seem strange, but climate change can intensify drought, too. We already mentioned that warming temperatures evaporate more water from land, and when (again, increasingly heavy) rain does fall on these areas, the water isn’t absorbed by the dried-out soil – instead, it runs off into rivers or the ocean, leaving the land still parched and often eroded, and starting the same vicious cycle all over again.

When we talk about the links between climate change and flooding, it’s useful to remember that there are at least four different types of flooding events. (And all of them are affected by climate change.) Here’s how the National Climate Assessment defines these different phenomena:

Many factors result in the weather events we experience, including flooding, so it can be a time-consuming task for scientists to directly link any one specific weather event to climate change. (But that’s changing too!) Scientists can readily observe trends over time – time being the central difference between climate and weather – and draw conclusions about our changing world.

Across the US, heavy downpours are increasing – especially in the Northeast, Midwest, and upper Great Plains regions. Since 1991, these areas have seen 30 percent more precipitation on the heaviest rain days, which the National Climate Assessment describes as “significantly above average.” 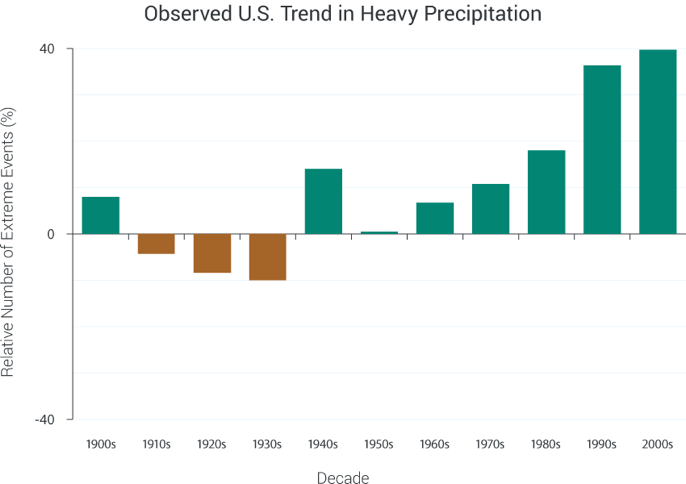 Davenport, Iowa – and other towns lining the Mississippi River – captured national headlines in 2019 after the region experienced very significant flooding. Why? In part because the region had both record-breaking precipitation and “more than a year's worth of runoff in the span of three months.”

Discussing the apparent trend of increased flooding in the region, climate scientist Kevin Trenberth told Inside Climate News in 2017, "Of course there is a climate change connection, because the oceans and sea surface temperatures are higher now because of climate change, and in general that adds 5 to 10 percent to the precipitation. There have been many so-called 500-year floods along the Mississippi about every five to 10 years since 1993."

Midwest towns are swamped by record floods. @Ryanyoungnews reports from Davenport, Iowa, where "businesses have been shut down for more than 24 hours. They've been underwater for more than 30 days." pic.twitter.com/5vUwInycBK

The floods alone were bad enough. But what about the longer-term impacts of the disaster?

Businesses in Davenport and places like it lost hundreds of thousands of dollars each as the community fought to recover. In addition to the cost of repairs, one local brewery owner, Tim Baldwin, lamented: “The real big kicker for us at the restaurant has been lost revenue during our busiest season — about $200,000 in profit over seven months that basically represents a year's worth of profit. Insurance doesn't cover that.”

Floods can also create ideal conditions that make us sick by increasing our exposure to water-borne illnesses, infections, and dangerous chemicals. While not in Iowa, flooding from 2018’s Hurricane Harvey left a destructive, toxic legacy. Houston, Texas is home to a booming petrochemical industry – and after Harvey, “nearly half a billion gallons of industrial wastewater mixed with storm water surged out of just one chemical plant.”

Iowa is also part of America’s breadbasket, an agricultural region producing a large percentage of the nation’s food. In March – before the record floods of 2019 even finished – farmers reported “hundreds of livestock are drowned or stranded; valuable unsold, stored grain is ruined in submerged storage bins; and fields are like lakes.”

This goes far beyond just one flood. Climate change is making the food supply we all depend on less secure.

If we don’t act, climate-change worsened flooding will continue to have an enormous impact on our infrastructure and our health.

You Can Make a Difference

We know that felt like a lot of bad news. Here at Climate Reality, we tell it like it is – but we also believe firmly in the power of climate hope. Because while things sometimes feel dire, the reality is that solutions to the climate crisis are available today.

And you can be part of the solution.

Did you know that one of the most impactful things you can do to solve climate change is just… to talk about it? To share the facts with people you know? Yes, really.

We make it easy.

Download our latest free fact sheet, Climate 101: Climate vs. Weather, and get up to speed with the facts so that you can talk to your family and friends about the important differences between weather and climate (hint: it’s mostly to do with time) and dispel denier myths.

You’re a trusted messenger in your community and you can make an impact. Download the fact sheet today.