WE®: How Is Climate Change Affecting Australia?

Few countries see almost every side of the climate crisis as clearly – and have as much to lose – as Australia.
January 12, 2019

Tourists know the country for the koalas and kangaroos that fill nature shows and iconic places like the Sydney Opera House that seem to appear in every Hollywood film shot Down Under. And then there’s the timeless mystery of vegemite.

But there’s good news, too. The country is also home to an incredible community of activists, who’ve fought potentially world-changing developments like the Carmichael coal mine tooth and nail.

So what’s at stake in the fight against coal and for climate solutions in Australia? Here are four key ways climate change is impacting the nation and its people – and one big way you can help turn Australia’s climate-fighting potential into a reality.

Simply put, Australia is already a hot and dry country and it’s expected to generally get hotter and drier without action on climate change. And make no mistake: An increase of 5 degrees Celsius (or 9 degrees Fahrenheit) is a huge deal.

Consider this: “Scientific records over the past million years show that as periodic ice ages ended, global average temperatures rose a total of 4-7 degrees Celsius over the course of about 5,000 years.” What happens in Australia when they rise by about that much in the space of less than 200 years? It’s uncharted territory.

We’re already seeing the impact of rising temperatures today. In January 2018, temperatures in Sydney soared to over 47 degrees Celsius (about 117 degrees Fahrenheit). It was the hottest day the city had seen in nearly 80 years. It’s true, heatwaves are not a new phenomenon. But climate change is making heatwaves more common, more severe, and longer lasting. Heatwaves have real impacts on human health and wellbeing – leading to heat exhaustion or even heat stroke. 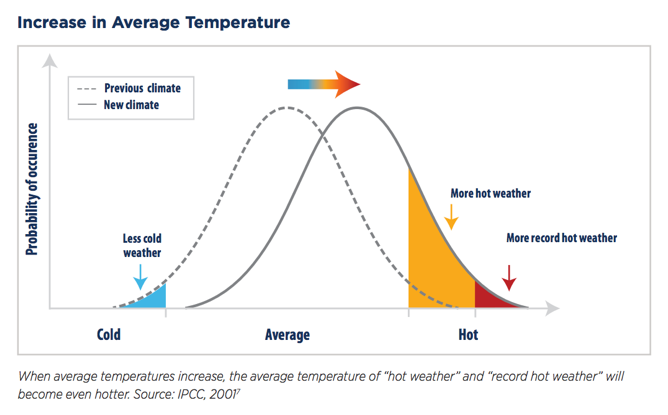 Image: Centers for Disease Control, Climate Change and Extreme Heat: What You Can Do to Prepare

There’s also a direct link between a hotter world and more drought. Andrew King, a climate scientist at the University of Melbourne, explained the connection to the Guardian:

“In general climate change is exacerbating drought, mainly because in a warmer world we experience more evaporation from the surface, and we project for that to continue in the future. So when it does rain, more of that water is likely to be lost to the atmosphere through evaporation than before human-caused climate change.”

In 2018, Australia battled “its worst drought in living memory.” And climate models indicate that, as rain patterns continue to change and heat continues to rise, southern Australia in particular will spend more and more time in drought going forward – unless we act.

It’s the middle of winter in Australia. And there’s a crippling drought

Australia’s most populous state in the grip of a major dry spell – and it may cost the country dearly. (via World Economic Forum)

Here’s the climate reality: Fire season in Australia has become longer and longer since the 1950s. Bushfires (what the Northern Hemisphere calls wildfires) are also becoming more extreme, especially in southern and eastern parts of the country.

We already know that Australia is becoming hotter and drier due to climate change – making the perfect conditions for bushfire. Plants dry up and die, the ideal kindling to fuel a fire.

At our Climate Reality Leadership Corps Training in Los Angeles, Ken Thompson (former deputy fire chief of the state of New South Wales) reported that fire season now runs for nine months out of the year in Australia. He explained, “The climate is changing and we’re seeing the effects of that on the frontline by more and more fires, more frequently, and more severe.” 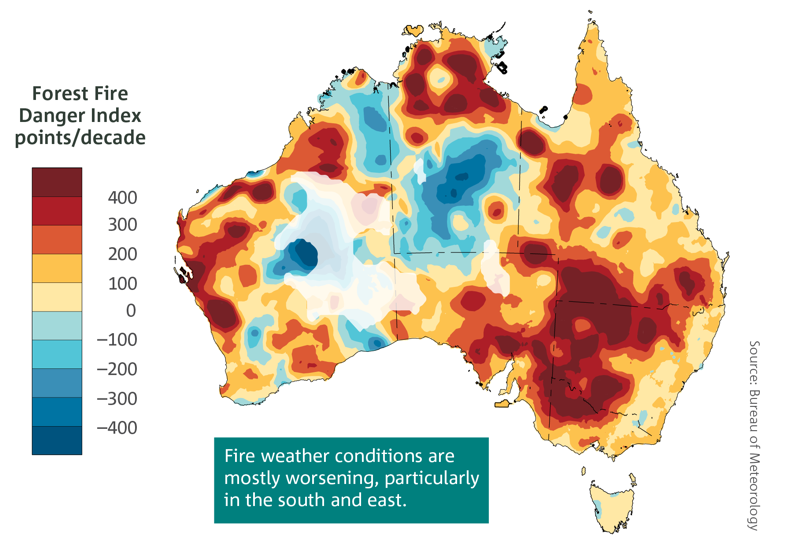 “Trends from 1978 to 2017 in the annual (July to June) sum of the daily Forest Fire Danger Index—an indicator of the severity of fire weather conditions.”

Image: Australian Government Bureau of Meteorology, State of the Climate 2018, cc by 3.0 AU

At the end of 2018, the Guardian characterized fire conditions in the nation as “catastrophic” as residents endured an extreme heatwave. In fact, at some points in mid-November 2018, the eastern state of Queensland battled nearly 200 fires – something Annastacia Palaszczuk, Queensland’s premier, described as “off the charts.” She went on to say, “No one has ever recorded these kinds of conditions ever in the history of Queensland.”

Here’s the climate reality: Farmers depend on a steady climate to grow food and raise livestock. The climate crisis makes it increasingly difficult for farmers to grow food for Australia.

As Australia’s climate changes, every type of farmer will be affected – from those who raise dairy cows to fruits and vegetable producers to wine growers and everything in between. According to Melbourne Sustainability Society Institute’s report, Appetite for Change: Global Warming Impacts on Food and Farming Regions in Australia:

The Ocean and the Great Barrier Reef

Here’s the climate reality: The Great Barrier Reef is larger than the Great Wall of China and the only living thing on our planet that can be seen from outer space. It might seem too huge to hurt, but our carbon dioxide emissions are killing the reef.

Ever heard of ocean acidification? We explained it in a blog from 2016:

“Our oceans are an incredible carbon sink — they absorb about 25 percent of the carbon dioxide humans produce every year. But this is changing sea surface chemistry dramatically: when carbon dioxide is absorbed by the ocean, it dissolves to form carbonic acid. The result, not surprisingly, is that the ocean becomes more acidic, upsetting the delicate pH balance that millions and millions of organisms rely on.”

Our oceans are being hit hard by a double whammy: they’re becoming warmer and more acidic – all because of greenhouse gas emissions. Since 1910, Australia’s ocean surface temperatures have warmed by about 1 degree Celsius (or 1.8 degrees Fahrenheit) .

What Does Climate Change Mean For The Great Barrier Reef?

The Great Barrier Reef is under serious risk unless greenhouse gas emissions are slashed. Here are the #ClimateFacts. (via The Climate Council)


Australia’s iconic Great Barrier Reef has been hit exceptionally hard by both factors. Stressed by warmer and more acidic waters, coral expels the colorful algae it depends on to survive. The coral turns white – known as “coral bleaching” – and unless the coral has a chance to recover and the algae can return, it can die, upsetting entire marine ecosystems.

Coral can recover from bleaching but that doesn’t always happen. In fact, about 30 percent of corals on the reef have died since the 2016 mass bleaching event.

Marine life depends on the Great Barrier Reef – and so do Australians. A Deloitte Access Economics report values the reef at over AUD $57 billion (over $40 billion in US dollars). The reef supports fisheries, helps employ more than 64,000 people, and brings tourists from around the globe to see this World Heritage Site. If we’re going to save the Great Barrier Reef, we must act on climate.

It’s clear that Australia has a lot to lose to climate change if we don’t take action. Unfortunately, much like in the US, Australia’s federal government has not risen to the challenge. Our friends at Australian climate change organization The Climate Council said it well: “Australia lacks credible national climate policy to drive down greenhouse gas pollution. This is why we are not on track to meet even our woefully inadequate 26-28 percent emissions reduction target for 2030.”

What can change this? You.

Climate Reality hosts Climate Reality Leadership Corps trainings to help activists gain the skills, knowledge, and network to shape public opinion, influence policy, and inspire your community to act at this critical time. Learn more about how you can join us today.