How the Climate Crisis is Affecting North and South Carolina

From dangerous heat waves to changes in long-standing precipitation patterns that may transform the states’ economies, climate impacts could make the future of North and South Carolina look very different from today.
January 7, 2019

Like so many Southeastern US states, North and South Carolina are already feeling the effects of the climate crisis. And also like in so many of these places, these effects will only become more pronounced unless we act boldly to slash greenhouse gas emissions.

“[I]n the coming decades, the region's changing climate is likely to reduce crop yields, harm livestock, increase the number of unpleasantly hot days, and increase the risk of heat stroke and other heat-related illnesses,” according to the US Environmental Protection Agency (EPA).

Read on to learn more about how North Carolina and South Carolina could be affected by this ongoing crisis.

The beaches and barrier islands along the Carolina coastline are popular vacation destinations for Americans from across the country (as well as folks from all around the world). From Kitty Hawk and Nags Head in North Carolina’s Outer Banks to Myrtle Beach’s arcade-dotted boardwalk in SC, these sandy shores have become family favorites, attracting millions of visitors every year. Add to that historic cities like Charleston, Charlotte, and Ashville; the unparalleled beauty of the Great Smoky Mountains along NC’s border with Tennessee; and a burgeoning culinary scene in the Blue Ridge Mountains foothill escape of Greenville, SC, and you have the recipe for a perfect vacation.

The millions flocking to these incredible destinations each year drive a huge part of the economy in the Carolinas. In South Carolina alone, tourism bolsters the state’s economy by over $15 billion – and tourism jobs make up over 10 percent of the state's employment.

But all that could change as the climate crisis escalates – and the Carolinas know it.

So it’s no wonder then that nine long years ago, the Charleston City Paper was already sounding the alarm over the climate threat posed to tourism in a cover story titled “Climate change and SC tourism.” If that sounds too understated, consider instead the article’s sub-head: “Paradise lost?”

The state’s official tourism slogan is “Made for Vacation.” But that motto may not hold true for much longer as sea levels rise. Depending on the action we take to reduce the greenhouse gas emissions driving climate change, sea levels are likely to rise anywhere from one to four feet in the next century along the coasts of North and South Carolina.

Making matters worse, parts of the Carolina coast are sinking, leaving many towns and cities, railways, ports, airports, and oil and gas facilities (which when inundated with water can result in added pollution spillage) even more vulnerable.

“Along much of the Atlantic Coast” – including parts of both North and South Carolina – “the land surface is sinking, so the observed rate of sea level rise relative to the land is greater than the global average rise,” EPA reports. 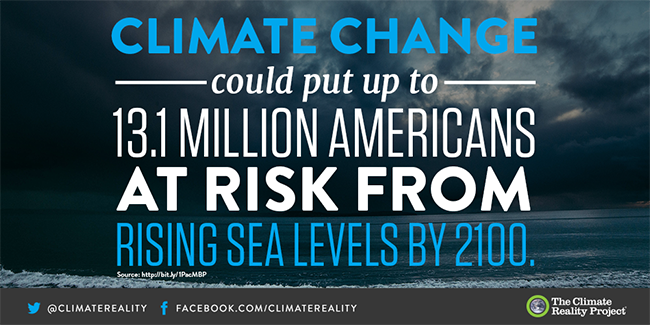 Beyond tourism and infrastructure, sea-level rise and attendant erosion threaten coastal homes and real estate, as well as one of the most necessary things for life on earth: fresh water.

The most serious and dangerous effect of this is saltwater contaminating potable drinking water for communities throughout North and South Carolina. But natural ecosystems are also incredibly vulnerable to this type of impact.

“Many species of birds and fish in North Carolina depend on coastal wetlands threatened by rising sea level. Blue crabs, shrimp, and southern flounder use marshes for both feeding and evading larger predators. Larger fish such as sea trout and red drum also feed in these marshes,” according to EPA.

In South Carolina, rising seas and saltwater intrusion into brackish and freshwater wetlands, rivers, and creeks spells trouble for a few different types of marine life, including clams, mussels, and oysters, as well as birds like egrets and the endangered wood stork.

Many of these – blue crabs, clams and mussels, sea trout, southern flounder, shrimp – are also valuable food exports for these states, compounding the economic threat swelling seas pose to the Carolinas.

In September 2018, powerful Hurricane Florence roared ashore in the Carolinas. While the once-mighty Category 4 storm had lost much of the ferocious wind energy it carried across the open Atlantic Ocean before making landfall, it retained something that has become a hallmark of climate change-exacerbated tropical storms: truly overwhelming precipitation.

“Florence is a sobering example of how a warmer planet has worsened the impacts of hurricanes,” CNN reported in the storm’s aftermath. “Florence's environment was warmer and moister because of climate change, said Kevin Trenberth, a senior scientist at the National Center for Atmospheric Research, and that set the stage for what was to be the storm's biggest threat: heavy rainfall and flash flooding.”

This is, in part, because a warmer atmosphere can hold more and more moisture. For every 1 degree Celsius (1.8 degrees Fahrenheit) of sea surface temperature warming, about 7 percent more moisture is held in the air. And as we saw with Florence, eventually all that extra moisture comes down as rain.

Indeed, according to National Geographic, studies have found that Hurricane Florence’s rains were projected to be “more than 50 percent worse than [they] would have been without global warming.”

Remember Hurricane Sandy? The science suggests storms like these will only become more severe as climate change progresses. #ClimateFacts (via The Years Project)


In parts of the Carolinas, Hurricane Florence quickly set records for the highest rainfall received from a single storm, as more than 30 inches swamped communities, giving the storm the dubious distinction of being the wettest tropical system to ever strike the US East Coast.

“Evaporation increases as the atmosphere warms, which increases humidity, average rainfall, and the frequency of heavy rainstorms in many places — but contributes to drought in others. … Since 1958, the amount of precipitation during heavy rainstorms has increased by 27 percent in the Southeast, and the trend toward increasingly heavy rainstorms is likely to continue.”

The Carolinas also must contend with rising temperatures and the threat of dangerous heat waves. Today, North Carolinians can expect temperatures to rise above 95 degrees Fahrenheit about 10 days each year. In 70 years, that number could be anywhere from 20 to as many as 40 days per year in most of the state.

This extreme heat can be dangerous and even deadly for people. But it can also harm animals on farms, disrupting their metabolisms and reducing livestock productivity. Add to that the impact of climate-related flooding and drought on plant and animal life – a flood will wash a farm away as surely as thirst will reduce it to dust – and the result is a real and growing threat to food security for many.

What Can I Do to Fight Back?