The Alliance for Climate Protection®: How the Climate Crisis Is Driving Central American Migration

The climate crisis is making life even harder for residents of Central America’s “Dry Corridor,” forcing farmers and other rural residents to leave their homes and livelihoods.
May 31, 2019

Remember how, late last year and into the spring of this one, you couldn’t turn on the news without hearing about immigration? Specifically, the “migrant caravan”?

Beginning late in 2018, more and more men, women, and children began leaving their homes in Central America to travel north to Mexico and the United States.

Their situation and the events that led up to their decision to leave their home countries are incredibly complex. Many media reports focused on violence and a lack of economic opportunity in Central America as the catalyst for much of this migration.

But what if we told you that the climate crisis is not only compounding those issues but is itself a major factor driving these migrants?

A majority of the migrants we see on the news, traveling through Mexico to the US, are from Honduras, joined by large numbers from El Salvador and Guatemala. These three countries occupy what’s known as the Central American Dry Corridor, and are particularly vulnerable to changes in climate, especially precipitation.

So what is the Central American Dry Corridor? And what is happening there? 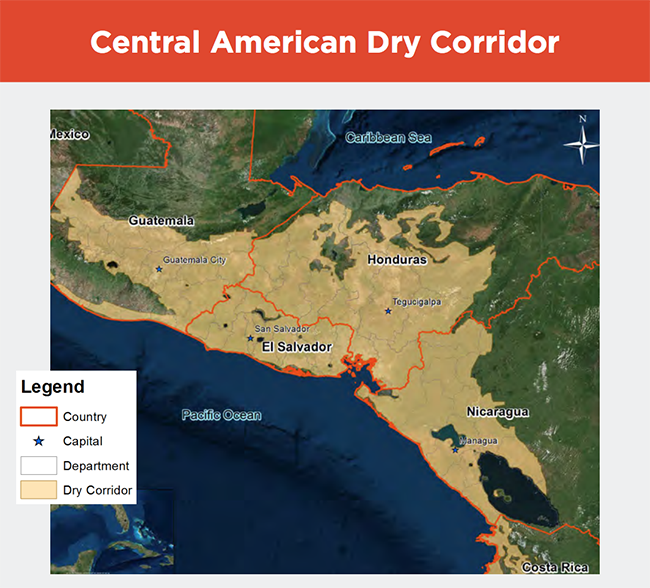 The Dry Corridor is an ecological region on the Central American Pacific coast that runs from far southern Mexico through Guatemala, El Salvador, Honduras, Nicaragua, Costa Rica, and Panama. This region has been experiencing severe droughts and floods – all exacerbated by the climate crisis – that threaten the physical, financial, and mental well-being of the people who live there.

Why is this region so susceptible to extreme weather events? It has to do with changing atmosphere-ocean circulation patterns near Central America. One of these is the El Niño Southern Oscillation, which makes the region particularly vulnerable to irregular rainfall, resulting in both droughts and flooding, which are becoming ever-more extreme because of our changing global climate.

More extreme weather has become a major issue with respect to economic opportunities and food security. More than 30 percent of jobs in El Salvador, Guatemala, and Honduras are in agriculture. So changes in climate trends and increasingly frequent and intense extreme weather events hit residents of these countries especially hard.

The latter half of 2018 brought a drought to the Dry Corridor that affected over 77,000 corn farmers in El Salvador and more than 65,000 families in Honduras.  The UN Food and Agriculture Organization (FAO) and the UN World Food Programme expressed concern that “total or partial loss of crops means that subsistence farmers and their families will not have enough food to eat or sell in coming months.”

Before this most recent extreme dry spell, the countries in the Dry Corridor faced another severe drought that began in 2014 and continued through 2017, resulting in the loss of crops and death of thousands of cattle, which put 2.5 million people at risk of food insecurity.

Just to repeat, that’s 2.5 million people at risk of going hungry. Thanks in no small part to the climate crisis.

How Is the Climate Crisis Impacting Migration?

In this region, agricultural employment opportunities are concentrated in rural areas where residents already face elevated levels of poverty and food insecurity. In Honduras and Guatemala, rural poverty rates are around 82 percent and 77 percent respectively.

Due to changes in the climate in the Dry Corridor and a lack of alternative economic opportunities, people are leaving their rural communities and heading for areas they hope are more economically prosperous.

Rural migrants in Central America often travel first to urban areas within their own countries. But once they arrive in the cities, they frequently encounter systemic issues from corruption to violence, including especially high rates of gender-based violence.

The migrants then leave these urban areas too, and begin to migrate internationally, mostly to Mexico or further north to the US. The decision to migrate is unique to each person’s experience, and therefore, it’s difficult to say exactly which factor – climate change and its impact on rural agriculture, violence and insecurity in the cities, a little bit of both, or another factor altogether – ultimately pushed them to leave their home countries.

Nonetheless, it is important to recognize that many migrants’ emigration began when they no longer had anything to eat – and that is significantly influenced by the climate crisis.

What Can We Do to Help?

A good place to start would be in the programs set forth in the UN’s Global Compact for Safe, Orderly, and Regular Migration, as well as in the work of other multinational entities like the UN Food and Agriculture Organization or the Inter-American Institute for Cooperation on Agriculture.

In December 2018, the UN adopted its first comprehensive compact on migration: The Global Compact for Safe, Orderly, and Regular Migration. The Compact sets forth guiding principles for parties to consider regarding their domestic and international migration policies, as well as 23 objectives that detail the steps that need to be taken in order to create better conditions for migrants across the world.

(The US voted against the Compact, however, stating that it does not align with its sovereignty over migration policy.)

No matter what, it’s clear we need a more humanitarian approach toward receiving and adapting policy for climate migrants like those that have been arriving at the southern border of the US.

We understand that migration policy is extremely complicated, but anyone can see that policies like separating families and detaining children are not humane, and that we can do more to support these migrants.

There is also room to improve the facilitation of information-sharing, collaboration, and implementation of programs in the Dry Corridor that will help farmers there adapt to a changing climate.

Our final suggestion is to address the root of the problem: We need to work together to reduce fossil fuel emissions in the US and around the world. Contrary to what some may say on television, many people don’t want to leave their homes. If we solve the climate crisis, we take away one of the great catalysts for migration – in Central America and around the world.

If you would like to be part of the solution, consider joining us for our next Climate Reality Leadership Corps training. At a training, you’ll gain the skills, knowledge, and network to shape public opinion, influence policy, and inspire your community to act at this critical time.