How the Climate Crisis Is Impacting Bangladesh

Rising seas, floods, and intensifying cyclones are just a few of the impacts that make Bangladesh one of the most climate change-vulnerable countries in the world.
December 9, 2021

Few countries on Earth so exemplify the deep inequity of the climate crisis as Bangladesh.

Despite producing only 0.56% of the global emissions changing our climate, Bangladesh ranks seventh on the list of countries most vulnerable to climate devastation, according to Germanwatch’s 2021 Global Climate Risk Index (CRI).

This threat is not an abstract one. The data shows that from 2000 to 2019, Bangladesh suffered economic losses worth $3.72 billion and witnessed 185 extreme weather events due to climate change.

The story of how that came to be is in many ways a story about geography.

Located east of India on the Bay of Bengal, the country is known for its many waterways, including the world-famous Ganges river. These are waterways that produce rich agricultural soil, allow extensive travel by boat, and provide access to the rest of South Asia and the world. 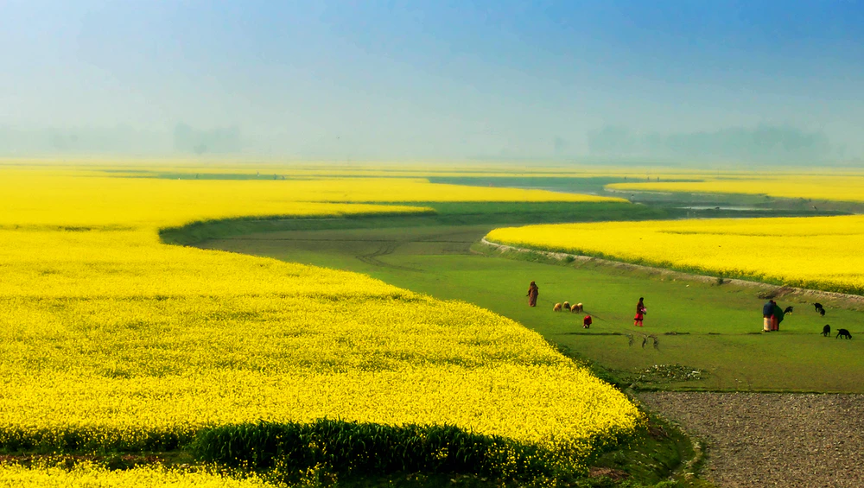 However, this same geography also makes Bangladesh one of the most vulnerable countries in the world to sea-level rise, increasingly powerful cyclones, floods, and more.

The threat could hardly be clearer. So, here’s a breakdown of some of the major ways climate change threatens Bangladesh.

Rising seas are a growing threat to people all around Bangladesh. That’s because a staggering two-thirds of the country is less than 15 feet above sea level.

For reference, the elevation of Lower Manhattan in New York City ranges from 7 feet above sea level to a high of 13 feet. And the threat becomes even clearer knowing that about a third of the population of Bangladesh lives by the coast.

It has been estimated that by 2050, one in every seven people in Bangladesh will be displaced by climate change. Specifically, with a projected 19.6 inch (50 cm) rise in sea level, Bangladesh may lose approximately 11% of its land by then, and up to 18 million people may have to migrate because of sea-level rise alone.

Looking even further down the road, Scientific American describes how “climate change in Bangladesh has started what may become the largest mass migration in human history… Some scientists project a five-to-six foot [sea-level] rise by 2100, which would displace perhaps 50 million people.”

What’s more, these rising seas now threaten to inundate the Sundarbans — the mangrove forest in southern Bangladesh. This is a doubly dangerous effect, given that this coastal forest doesn’t just sustain biodiversity and livelihoods, but also shields Bangladesh from the worst of the region’s many cyclones. 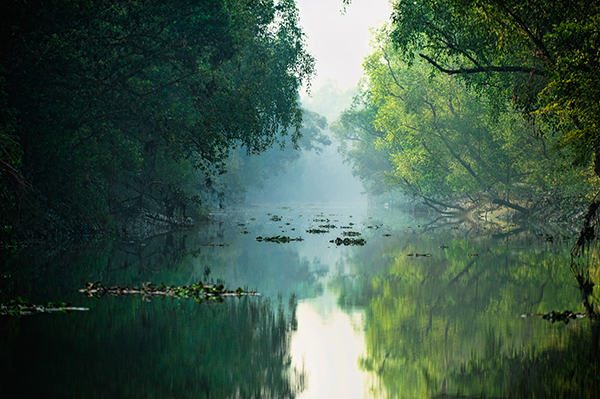 On top of increasingly ruining crops, salinization threatens the drinking water supplies of tens of millions of people in coastal communities. Consuming this salty, contaminated water can expose populations to health problems like cardiovascular diseases.

Overall, salinity in the country’s soil has increased by about 26% over the past 35 years.

It’s a well-known fact that, all around the world, climate change is making rainfall more erratic and often far more intense. In Bangladesh, this reality rings especially true.

This phenomenon of stronger downpours – combined with rising temperatures melting the Himalayan glaciers that feed rivers around Bangladesh – is leaving massive swaths of the country far more prone to devastating floods.

Increasingly, supercharged water levels in the Ganges-Meghna-Brahmaputra River Basin are destroying entire villages and hundreds of thousands of livelihoods. Devastation that contributes to over 10 million Bangladeshis already being climate refugees. 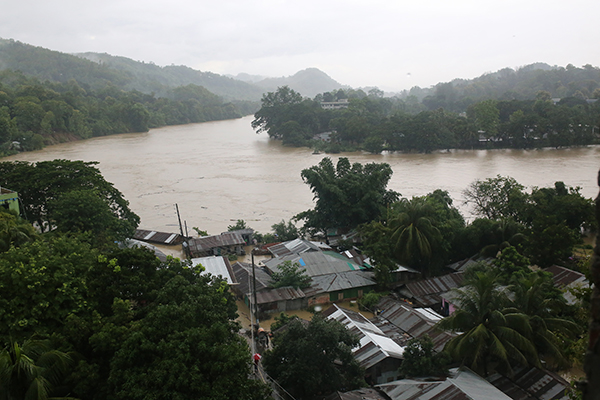 (Flood affected area in the Bandarban district of Bangladesh.)

As UNICEF describes, “Around 12 million of the children most affected [by climate change] live in and around the powerful river systems which flow through Bangladesh and regularly burst their banks. The most recent major flooding of the Brahmaputra River in 2017 inundated at least 480 community health clinics and damaged some 50,000 tube wells, essential for meeting communities’ safe water needs.”

Of course, that example specifically describes the impact of flooding on children. But the takeaway is clear. Millions of Bangladeshis are having to uproot their lives and migrate because of overflowing rivers.

By one estimate, up to 50% of those now living in Bangladesh’s urban slums may be there because they were forced to flee their rural homes as a result of riverbank flooding.

Similarly, a study completed in 2012 of 1,500 Bangladeshi families migrating to cities, mainly Dhaka, showed that almost of all of them cited the changing environment as the biggest reason for their decision.

Overwhelmingly, when these migrants move into big cities, they don’t find refuge from rural climate challenges, but rather, more and at times worse problems. As the video below describes, they’re forced to settle into densely populated urban slums with rudimentary housing conditions, poor sanitation, and limited economic opportunities.

The riverine flooding and other climate impacts contributing to this unmanageable urbanization has no end in sight. Especially without serious climate action.

The Bay of Bengal narrows towards its northern shore where it meets the south coast of Bangladesh. This “funneling” can both direct cyclones towards Bangladesh’s coast and make them more intense.

These effects –  combined with the fact that most of Bangladesh’s territory is low, flat terrain – can make storm surges absolutely devastating. 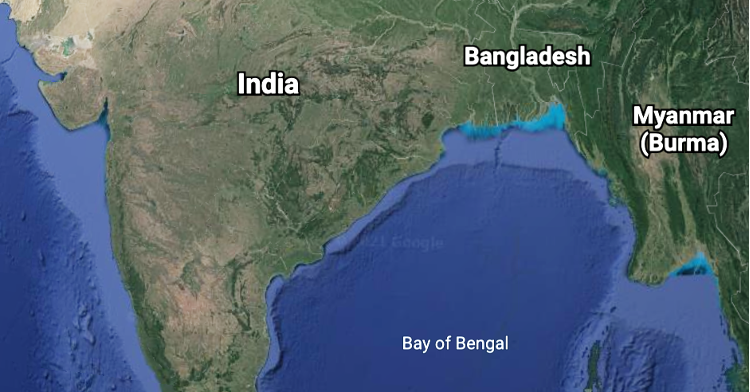 Over the last decade, on average, nearly 700,000 Bangladeshis were displaced each year by natural disasters, according to the Internal Displacement Monitoring Centre. The annual number spikes during years with powerful cyclones, such as the following: 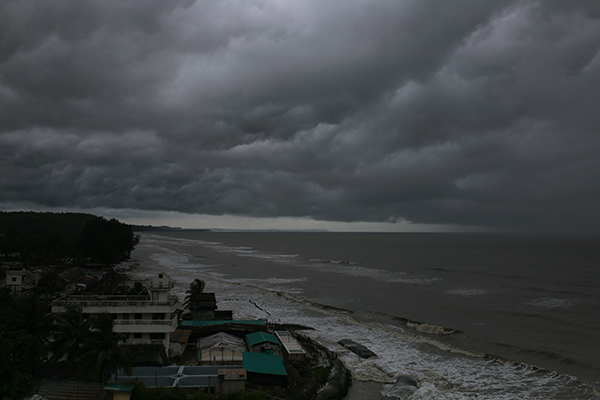 For a final example, just this year Cyclone Yaas made landfall with a wind speed of 93 miles (about 150 kilometers) per hour, like its predecessors, bringing momentous devastation, and claiming unnecessary lives.

Now, it can be easy to get lost in the numbers, especially when they’re so overwhelmingly large. But the takeaway is clear: Stronger cyclones are becoming more common because of our changing climate. As a result, Bangladesh is bearing more and more of the same tragic aftermath.

As a country, Bangladesh emits only a tiny fraction of the greenhouse gas emissions causing climate change. Perhaps more telling, the average person in Bangladesh emits 0.5 metric tons of CO2 per year. In the US, for comparison, that number is 15.2 metric tons per person — about 30 times as much.

JOIN OUR MOVEMENT FOR CLIMATE SOLUTIONS

For Bangladesh, for so many other countries, and for everyone’s shared future, the time to act on climate change is now.

Fortunately, we can still make a world of difference.

In the US, the Senate now has the chance to tackle this threat head-on and pass the most ambitious climate bill in the nation’s history — the Build Back Better Act. But passage is far from assured, and our senators need to hear from us to get this over the finish line.

Take action today and tell the Senate: Pass the strong Build Back Better Act we need to stop global warming and create a brighter future for everyone.

Additionally, we invite you to join our activist email list. We’ll keep you posted on the latest developments in climate solutions and what you can do to make a difference.