There’s More Nature in Your City Than You Think

Although, there may not be parks at every turn, cities offer a different perspective on nature and can tell us about current climate impacts.
March 22, 2022

Usually when picturing the word “nature” in our heads, we envision somewhere far away from a city – a place with no skyscrapers, noise, and worst of all, traffic.

However, around 56% of the world's population live in cities – that's a decent amount. The hustle and bustle of city life often causes people to forget to notice the nature around them.

We spoke with Deja Perkins – a passionate urban ecologist, science communicator, climate justice advocate and avid birder, who is advocating for people to stop and observe the nature all around them – no matter where they are.

Deja is paving the way for a new wave of Black climate leaders. Proven as a force to be reckoned with, she has recently been named one of North Carolina’s Black STEM Leaders.

Climate Reality spoke with Deja via zoom recently to discuss her story and how her work is changing the conversation about cities – one bird walk at a time. 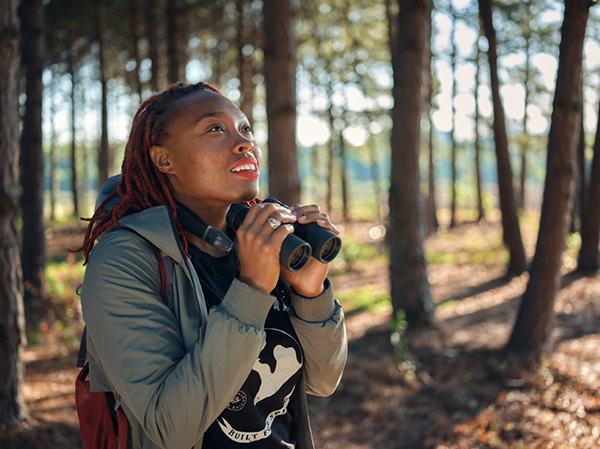 For Deja, going to the zoo was the closest she got to seeing animals when she was young. However, she still didn’t have a full concept of what wildlife was. Growing up in the Chicago city limits, her neighborhood was not very green – the closest park being roughly 10 minutes away. As she grew up, she intentionally positioned herself to be a part of nature-based organizations in high school.

After high school, she attended Tuskegee University where she originally planned to major in animal science to become a vet. But she quickly realized her curiosity was directed elsewhere and switched her major. Asking questions like “What wildlife does this plant attract?” led her to majoring in environmental science, natural resource and plant sciences with a concentration in wildlife.

After undergrad, Deja attended Mississippi State, joining the wildlife and fisheries program. During her time there, she realized that there was a massive demographic being excluded from the climate conversation: cities. She noted, “Urban places deserve a place in conservation because cities are the future. A lot of people live in cities, and they should be able to have a connection with nature.”

The next part of her journey led her to North Carolina State University where she obtained a master’s degree in fisheries and wildlife conservation biology. Dr. Madhusudan Katti, a professor at the university became Deja's advisor. He was conducting urban bird research and asked Deja to be a part of it.

Later, she discovered the research would help her develop a love for birds. “I was involved in a participatory science project called the Triangle Bird count where I would drive around different cities in North Carolina and observe birds,” she said.

The participatory science project was a pivotal part in Deja’s career. From going to different neighborhoods and observing various birds, she realized just how differently people experience life. “It really struck something within me because of the type of neighborhood I grew up in. I didn’t have access to a lot of nature and then I realized how I wish I had some of these opportunities to experience it.”

Deja’s connection to Chicago has helped her develop an appreciation for cities and she strives to help others see their importance – especially when talking about climate.

In 2007, internet searches for the phrase “global warming” peaked rapidly, not long after former Vice President Al Gore appeared in “An Inconvenient Truth.” The documentary was the first of its kind to explore our human impact on the environment and climate in such a plain-spoken and conversational mode.

For many people, including Deja, the way people talked about climate change was very different back then.

“I don’t think ‘climate change’ was the word that was used growing up for me. People were always talking about global warming – it was an abstract concept,” she said.

For Deja, being a scientist and a science communicator means working to make the issue concrete for people and communicate about the climate impacts in cities in a relatable and approachable way.

During her time at NC State, she was selected to work as a global change fellow with the Southeast Climate Adaptation Science Center.

“My experience there was fundamental because how can I explain something to people that I don’t even understand myself?” The concept of constantly learning and growing is important for science communicators. As Deja said, how can we discuss something we don’t know anything about?

A great way to learn firsthand how climate change is impacting you directly is to engage with participatory science projects. “Participatory science acts an agent in monitoring your own environment, rather than seeing global and national level effects. You can be in a suburb, rural environment, or city and that’s good because everyone is somewhere different – that’s the point,” Deja said.

Participatory science gets people talking about climate change but without all the technical jargon and makes learning about your environment fun. And we all like fun things, right?

Nature is for Everyone

One of the biggest projects Deja helped co-create was the social campaign known as Black Birders Week. Organized by the collective known as BlackAFInSTEM, the week showcases the various ways Black people can connect with their environment, no matter where they are.

Deja’s time living in cities has helped her see firsthand how access to nature and environmental programs differs for minority neighborhoods.  She believes everyone should have equal access to natural spaces.  However, to do this she believes BIPOC individuals must be brought into the climate conversation.

“For me it’s always been about having a seat at the table. I want to make sure environmental benefits we have aren’t just going to certain communities and I feel like it’s my role to be the voice for those who have been voiceless.”

Deja is a living testament of how resilience, passion, and creativity can come together. She has created her platform, Naturally Wild, to show BIPOC communities that they can explore the outdoors even when they are not always publicly represented in those spaces. The name came easily to her. “As a Black woman with natural hair who loves all things wild, I am Naturally Wild.”

Living authentically and unapologetically as herself, she is breaking down barriers and stereotypes many Black women face in STEM. She hopes to continue inspiring the next generation of Black scientists and climate leaders. “The work I do is not just about me – it’s about making sure my community thrives and is not just surviving.”

From taking local people birding, giving talks on participatory science projects, or learning about the intersection of environmental justice and conservation, Deja is always using her platform to make a difference. She hopes people will come as they are - regardless of where they’re from - and enjoy the outdoors alongside her. 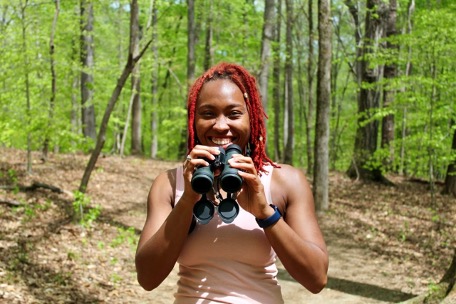 To learn more about what you can do to make a difference in our fight for climate justice or engage with your local community, join our email activist list.