What are climate change tipping points?

A handful of natural systems — think the Amazon rainforest and Antarctic ice sheets, for example — have kept Earth’s climate relatively stable over the past 11,700 years. Now, scientists worry that we’re pushing them toward irreversible change.
October 15, 2021

If you’ve been reading the climate headlines recently, odds are you’ve heard about “tipping points” — and for good reason. Crossing these points threatens to irreversibly disrupt the natural systems that have kept Earth’s climate relatively stable for thousands of years.

To say the least, this could be a game-changer in the fight for our planet.

And while the scientific community doesn’t yet have all the answers surrounding climate tipping points – like at what exact temperatures they might occur, at what rate we might see changes, or how they might impact each other – one thing is certain: they’re a risk we can’t afford to ignore.

So, what exactly are climate tipping points and what does the latest science about them suggest?

WHAT ARE CLIMATE CHANGE TIPPING POINTS?

Picture this: you’re carefully tip-toeing your way up a seesaw. At first, walking on it with complete stability.

But then, you reach the middle, and the seesaw naturally topples over in the other direction. This movement simultaneously knocks you off and leaves you unable to stop its descent.

In essence, that’s what climate change tipping points are. As the Intergovernmental Panel on Climate Change (IPCC) explains in its latest report, they’re “a critical threshold beyond which a system reorganizes, often abruptly and/or irreversibly.”

For a real-world example, think of rising temperatures increasingly melting Arctic sea ice. These are millions of square miles of ice that, when melted, expose dark ocean waters to sunlight. Dark water absorbs drastically more energy than ice and contributes to further warming.

The effect (ice melting) fuels its very cause (warming temperatures), creating a feedback loop leading to more and more warming that then prevents ice from forming and covering the dark water.

Like various ice sheets around the world, many climate-regulating systems are currently being pushed to their limit. And crucially, change in each of these systems on their own is not only already disrupting the planet, but creating a knock-on effect driving change in various other systems as well.

In theory, this connectedness is why climate tipping points are so dangerous.

Because the more that any single system is pushed, the more global warming and general disruption ensues, and thus, the more likely it is that others could be set off.

WHAT THE LATEST SCIENCE SAYS ABOUT TIPPING POINTS

The IPCC first addressed the possibility of climate tipping points two decades ago in its third assessment report, published in 2001. Even back then, experts described how, “Human-induced climate change has the potential to trigger large-scale changes in Earth systems that could have severe consequences at regional or global scales.”

However, at that time tipping points were considered likely only if global warming surpassed about 5 °C above pre-industrial levels.

Fast forward to 2015, and a study that informed the IPCC’s Fifth Assessment Report (AR5) found that 18 out of 37 “regional abrupt changes in the ocean, sea ice, snow cover, permafrost, and terrestrial biosphere” actually occurred below 2°C in global warming simulations.

Similarly, IPCC special reports published in 2018 and in 2019 suggested that the possibility of passing certain tipping points could happen between 1 and 2 °C of warming. This is crucial because our planet has already warmed about 1.1-1.2°C since the pre-industrial era.

Arriving at 2021, a released portion of the IPCC’s Sixth Assessment Report (AR6) mentioned tipping points nearly a hundred times, projecting with “high confidence” that “Abrupt responses and tipping points of the climate system, such as strongly increased Antarctic ice sheet melt and forest dieback, cannot be ruled out.”

What’s more, the report made clear that, “Some of the abrupt climate changes and climate tipping points discussed in this report could have severe local climate responses, such as extreme temperature, droughts, forest fires, ice sheet loss and collapse of the thermohaline circulation.”

That, and arguably the most important takeaway from the analysis, “the higher the warming level and the longer the duration of overshoot, the greater the risk of unexpected changes.”

The bottom line: Tipping points are real – and likely ahead of us.

Two examples of tipping points that experts believe could already be unfolding include the degradation of the Amazon rainforest and melting Arctic permafrost.

THE SAVANIFICATION OF THE AMAZON RAINFOREST

Spanning an area twice the size of India, the Amazon rainforest is the largest forest in the world. What’s more, having been around for 55 million years, it’s the fourth oldest.

Yet, in just around a century, we’ve managed to lose about 20% of its total area to deforestation. 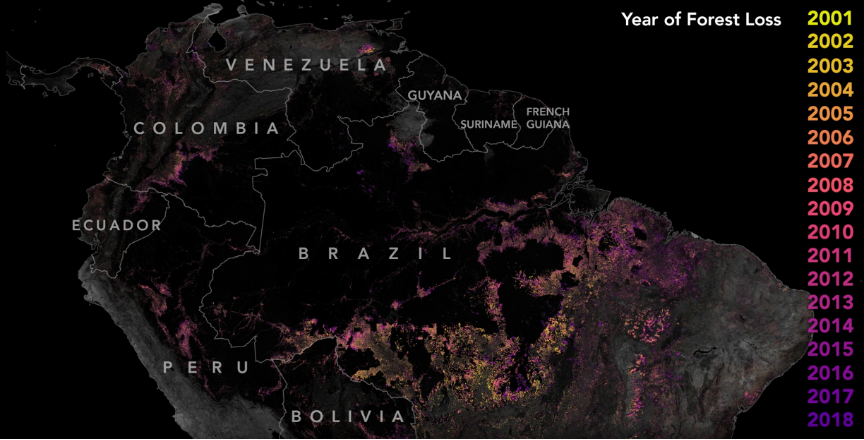 (Amazon deforestation over the past two decades. Credit: NASA)

From a climate perspective, this deforestation is really bad news. That’s because the Amazon’s resilience depends on its size.

Specifically, because this forest generates about half of its own rainfall by recycling moisture. As water evaporates and transpires from trees, the air then moves it onto other trees that need it.

But now, this process is being disrupted. Rapidly rising global temperatures, often in the form of heatwaves and drought, and deforestation are pushing the Amazon beyond its adaptative limits and toward its tipping point: a transition from the lush rainforest we know to a savanna. 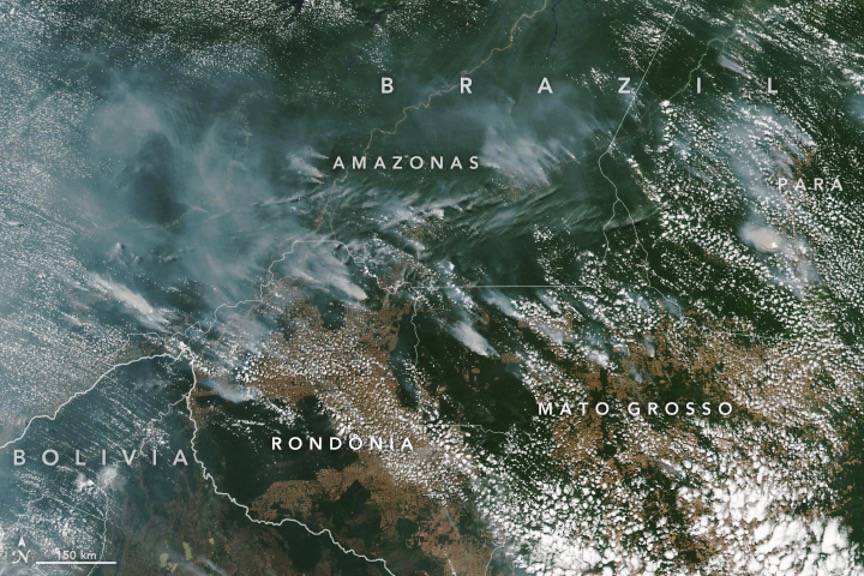 Placing this possible tipping point in the context of the planet, the Amazon rainforest had previously been a carbon sink, but it’s now emitting over a billion tons of carbon dioxide a year.

What’s more, experts estimate that the Amazon stores up to 200 gigatons of carbon — the equivalent of four or five years' worth of human-made carbon emissions. Releasing this carbon would not only increase warming in the Amazon and across the planet, but also accelerate other tipping points all around the world.

Permafrost is ground that contains organic material and is frozen for two or more years. 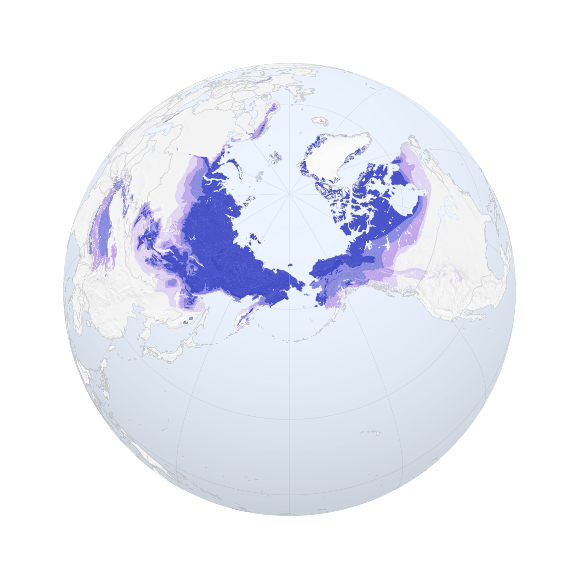 Here’s the catch: this frozen ground holds vast amounts of carbon, derived from plants and animals that have died and decomposed over thousands of years. So much so that the National Oceanic and Atmospheric Administration (NOAA) believes there is nearly twice as much carbon in northern permafrost than is currently in the Earth’s atmosphere.

To the alarm of climate scientists, NOAA found that this permafrost region has already started to lose more carbon than it captures — releasing 330 million to 660 million tons (300 million to 600 million metric tons) of carbon annually, which is about equivalent to the emissions of electrifying more than 36 million homes. 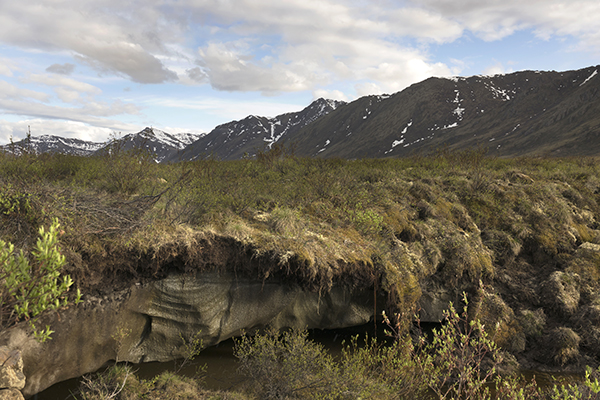 Similarly, in its “Special Report on the Ocean and Cryosphere in a Changing Climate,” the IPCC described how “Widespread disappearance of Arctic near-surface permafrost is projected to occur this century as a result of warming (very high confidence), with important consequences for global climate.”

Just like the Amazon, this tipping point could be near or even well underway.

And just like the Amazon, if tons of permafrost melts and emits millions or even billions of tons of carbon, the resulting warming won’t just melt yet more permafrost — it could also melt more sea ice, contribute to more forest die-back, and so on.

TAKE ACTION FOR OUR FUTURE

Yes, the possibility of passing climate tipping points is all too real. But there’s also good news.

As Ko Barrett, vice chair of the IPCC, recently expressed while discussing tipping points, “[W]ith immediate, large-scale and sustained reductions in greenhouse gases, we can slow or even stop some of the impacts.”

In other words, the power to prevent the worst of the climate crisis and create a bright future is still in our hands. But only if we act.

In the US, Congress now has the chance to tackle this threat head-on and pass the most ambitious climate bill – aka the Build Back Better Act – in the nation’s history. But passage is far from assured, and members of Congress need to hear from us to get this over the finish line.

After taking action, join our activist email list. We’ll keep you posted on the latest developments in climate policy and what you can do to help solve the climate crisis!