We encourage anyone and everyone to come out to our Climate Reality Leadership Corps trainings, and recently, we’ve seen a major influx in students rushing through the door, excited to learn more about the climate crisis and demanding we take action to solve it.

Young people are too often dismissed for their “Gen Z tendencies” (whatever that even means), but our Climate Reality student activists are saying “no more.”

Following their respective trainings, these leaders and their Campus Corps chapters are demanding their voices be heard – and are looking to make real change, starting on their university campuses.

"Some of the most inspiring activists… are young people who have taken up this cause around the world.” – Vice President Al Gore, Founder & Chairman, The Climate Reality Project

Climate Reality Leadership Corps trainings bring a sense of clarity to these young individuals, who then take the skills and power they cultivated at the training back to their campuses.

Serving as a microcosm of the larger world, a university campus brings together students of diverse backgrounds, interests, and motivations, and allows student activists to pull their chair up to the table, working to change university policy that affects their day-to-day life.

We felt palpable power and drive on the ground at our Climate Reality Leadership Corps training in Atlanta this spring. Students were buzzing, networking, and even took the stage with former Vice President Al Gore.

Doane University student Zach Renshaw was on the edge of his seat, excited to learn more. At the time, he didn’t know what Campus Corps was, but he knew he was eager to make real change alongside his peers. After attending the training, Zach was ready to cement Doane’s commitment to climate action by urging the school to divest the entirely from fossil fuels. He started a Campus Corps chapter with four other interested students and hit the ground running.

On May 3, the Doane University Board of Trustees passed a resolution to stop current and end all future investments in fossil fuel companies. Climate Reality Campus Corps chapter members at Doane were the first students to introduce the divestment bill to the board of trustees. They collected over 500 petition signatures in support, published an opinion editorial, and helped write and monitor the delivery of letters of encouragement to the board.

“As a Doane student, I am incredibly proud of the work we have done on campus after being formed as a Campus Corps chapter only a few weeks ago. As the first school in Nebraska to divest from fossil fuels, we are excited to continue to work with the school to commit Doane to 100 percent renewable electricity by 2030. The work Doane is currently doing through the creation of the Institute of Human and Planetary Health is another important step the university is taking to mitigate climate change,” said Zach, who now chairs the Climate Reality Campus Corps: Doane University Chapter. “Our group recognizes that the future is in our hands, and we are committed to ensuring that Doane does all it can to fight climate change.” 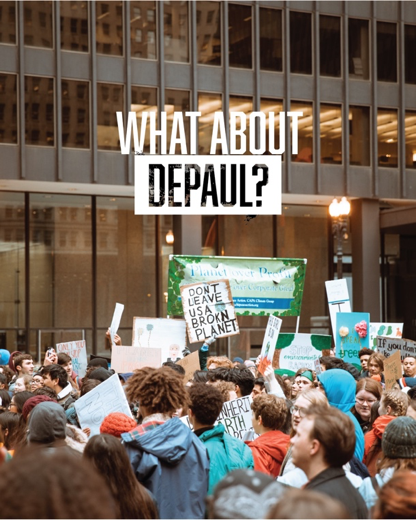 FROM SUNNY CALIFORNIA TO THE WINDY CITY: THE CLIMATE CRISIS KNOWS NO BOUNDARIES

Following the Climate Reality Leadership Corps training in Los Angeles in 2018, DePaul University Campus Corps Chapter Chair Nicole Granados felt her call to action. The training allowed her to learn from experts within the industry and hear stories from those directly affected by climate change. But she also made life-long friends who solidified that she was meant to be there. When she returned to DePaul for the fall semester, she realized there were no environmental activist groups on campus, and also found it problematic that the university is one of the only schools in the Chicago area that doesn’t have a sustainability plan in place that aims to tackle the climate crisis.

Nicole “missed the community I had created in Los Angeles with fellow college-aged climate activists,” so she decided to form a similar community on campus by starting the university’s Campus Corps chapter. Channeling the motivation from the training, the chapter immediately started working with Climate Reality’s public Chicago chapter to demand Chicago commit to 100 percent renewable electricity.

The Campus Corps chapter marched, lobbied, and wrote countless letters in order to make the transition happen. The letters outlined why 100 percent renewable electricity is necessary in ensuring a clean future for everyone.

In April, the city of Chicago committed to 100 percent clean electricity by 2035, making Chicago the largest city in the country to commit to renewables. With the entire city committed, Nicole is confident that this momentum will open up the conversation about clean energy on DePaul University’s campus as well. 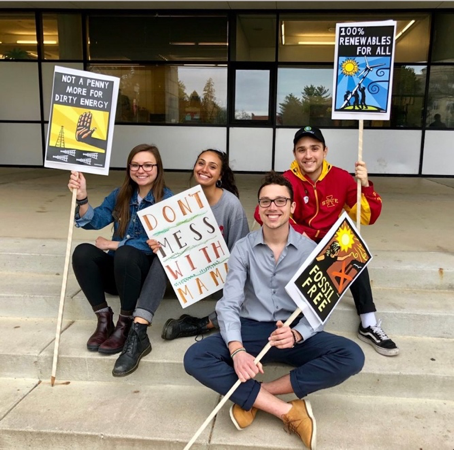 Following the 2018 Los Angeles training, Gabby Heidrich was done feeling like she had no power to change anything. As a member of Climate Reality’s Campus Corps Scholarship original cohort, she connected with fellow student climate activists at the training and realized her capacity to do more. Reenergized and excited, Gabby headed back to Iowa State University, where she brought everything she learned to her Campus Corps chapter.

As a school that still burns coal on campus, the Campus Corps chapter at Iowa State University knew the importance of holding the university accountable and generating support from the general student body for the transition to clean energy.

The state of Iowa currently generates around 34 percent of its electricity from renewables, underscoring the students’ feeling that their school’s fossil fuel investments left them in the dust.

In March, the Campus Corps chapter presented a student government resolution calling for a climate action plan, one that would lead the campus to 100 percent renewable electricity by 2035, a climate action and sustainability statement from Iowa State's president, and student input on future energy plans. The resolution ended up passing unanimously with the student government, and complimented a faculty senate climate resolution that had passed a year prior.

The chapter hosted a rally for students to speak their truth about climate action and sent over 100 emails to the university’s sustainability director demanding more, culminating in a meeting with university President Wendy Wintersteen. The meeting was incredibly productive, as leaders of our chapter echoed the urgency of climate action, and presented President Wintersteen with over 1,500 student signatures calling for 100 percent renewable electricity on campus by 2035. Following the meeting, President Wintersteen agreed to continue meeting with the chapter to keep Iowa State accountable and on track. 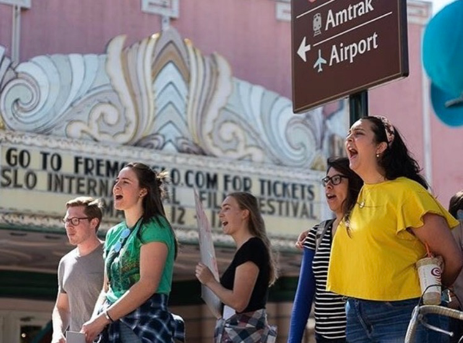 Dylan Stafforini attended the 2018 Los Angeles training, which kickstarted his climate motivation and highlighted the connection between the climate crisis and equity and environmental justice. Following the training, Dylan took his knowledge back to his campus at California Polytechnic State University, San Luis Obispo and began to implement what he learned on the ground as the university’s Campus Corps chapter chair.

The chapter helped both San Luis Obispo and Morro Bay sign on to the Monterey Bay Community Power energy coalition, which moves the cities off Pacific, Gas & Electric and into a coalition of local governments that decide how and where they buy their energy. As a chapter, the students attended all related city council meetings to voice their support for climate action, met with city councilmembers, and forged relationships with community leaders to make this happen. San Luis Obispo chose to value carbon-free electricity, and now, four more nearby cities are exploring the same choice.

“Climate activism has become a deeply connected part of my professional career in city and regional planning. Equity and justice are paramount to the success of a carbon-neutral future,” Dylan said. “The most vulnerable communities in our society should be the focus of all of our efforts for a carbon-neutral future.”

Dylan attributes the success of their chapter to persistence. Solving the climate crisis requires a continuous effort and can take time. It’s important to find allies and work together to craft a message that will resonate. And everyone needs to be working together toward the same goal.

POWER IN NUMBERS – JOIN THE FIGHT

Check to see if your campus has a Climate Reality chapter you can join here. If it doesn’t, consider starting your own Campus Corps chapter by reaching out to campuscorps@climatereality.com.