Changing the behavior of one person is hard enough – let alone millions of citizens around the world. Find out what lessons psychology can teach us about inspiring climate action.
February 5, 2018

There’s the old line that the first step to solving a problem is understanding it. But when it comes to climate change, what happens when understanding alone isn’t enough?

We know it’s important to educate the public so people understand why climate change is happening, what regions are most at risk, and how impacts like sea-level rise, extreme weather, and ocean acidification continue to harm our health and economy.

But education is the easy part. It’s getting people to take action that can be a challenge – and that’s because changing people’s attitudes and behaviors is a daunting task.

Have you ever made a New Year’s resolution, say, to eat healthier – and you find yourself saying “yes” to that second piece of chocolate cake on January 15? You may know eating too many sugary treats isn’t good for your health (attitude), but you may find it difficult to stick to eating healthier (behavior).

Social scientists of all kinds have studied the question of how to change human behavior in many different contexts from public health to public policy to environmental psychology and more. In the climate context, environmental psychologists have begun exploring this larger question by trying to understand why, for example, more Americans aren’t taking action with their votes and voices. Especially when the majority agree that humans are causing climate change.

There’s no simple answer here. The reality is that changing the behavior of one person is hard enough – let alone millions of citizens around the world. But psychology can give us some insight into better ways to motivate people to change their behavior and stand up for the planet we share.

That’s why we’ve compiled four lessons from the field that any activist can take and use to help inspire their friends, colleagues, family members, and more to act.

Climate change is a unique issue because although millions of people in the US and around the world feel the drastic effects of it in their daily lives, many people don’t (yet).

Why is psychological distance relevant to the climate crisis? Studies have found that people who believe the effects of climate change are unlikely to happen to them or are more likely to affect other people and regions of the world are less likely to be concerned about solving it. In other words, if climate change feels psychologically distant, you worry less about it in your daily life and feel less urgency to take action.

To bridge this gap, research suggests that we should discuss how climate change affects communities and families on the local level. That means calling attention to real-life examples of how the climate crisis is affecting real people, especially in regions experiencing extreme weather. From wildfires destroying homes in the western US to hurricanes damaging homes and businesses along the Gulf Coast and southern US to droughts affecting farms in dozens of countries, it’s clear that extreme weather is devastating the livelihoods of many communities around the world.

Humans are pack animals. In 1943, American psychologist Abraham Maslow created his Hierarchy of Needs, which proposed that humans have certain needs that begin with the most basic needs (food, sleep, safety) and end with ego-centered needs (self-esteem, creativity). 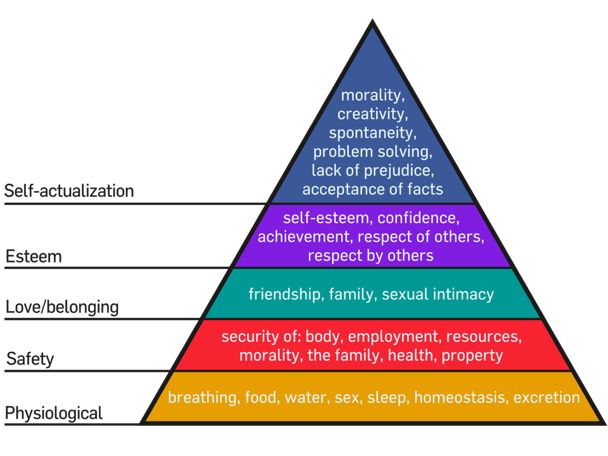 The hierarchy also proposed that once humans have their physical and safety needs satisfied, the next need in the hierarchy is belongingness. Put simply, humans are social beings that respond to group norms, and for our ancestors, group acceptance meant access to shared resources and feeling protected from predators.

Today, humans are just as keenly aware of social dynamics and psychology tells us that we fear feeling socially rejected. That’s why the more we can make climate action the norm in our social and family circles, the more likely others will join in.

The psychological concept of loss aversion is nothing new, but behavioral scientists have started thinking about it more as it relates to the climate movement. One study examined how framing climate change impacts can affect attitudes and perceptions. In the experiment, researchers presented different climate change impacts to participants (sourced from the 2007 Intergovernmental Panel on Climate Change (IPCC) report), who then answered questions about what they saw.

So when talking about climate change with your friends and family, explain how action is an opportunity. For example, America’s Clean Power Plan, which is now under threat by the Trump Administration, could lead to public health and climate benefits worth an estimated $34 billion to $54 billion annually in 2030. Those are some serious gains! If you agree, we invite you to add your name to support the Clean Power Plan and stand up for clean energy.

4. Give your friends real ways to take action to prevent “environmental melancholia.”

We know that the climate crisis isn’t just an environmental issue. Not only do the people who experience extreme weather, warmer temperatures, drought, rising sea levels, and other devastating impacts feel psychological effects, but many people are affected simply by hearing about the crisis or seeing unsettling images in the news.

Dr. Renee Lertzman, a researcher who promotes climate change activism inside the workplace, explains that people often experience “environmental melancholia.” She explains that although we know the climate crisis is a threat, many people feel anxious and powerless about how they can make a difference, which can prevent them from doing something.

By understanding that people may feel powerless when thinking about the climate crisis, we should communicate and provide real ways to take action and support them throughout the process. If your friends or family members feel powerless or have anxiety about getting involved, one way to help is to share helpful content that gives them specific ways to take action. Our blog post, “Four Ways Anyone Can Take Climate Action,” is a great place to start.

How You Can Make a Difference

Humans are complicated and changing behavior is no easy task, but thinking about how to overcome apathy or powerlessness is the first step to getting others involved with the movement for solutions. If you’re ready to make a difference in your community, download our Make It a Reality Action Kit now to get started. Our climate action kit will give you a thorough look at the climate crisis and ways you can participate in the fight for a bright, sustainable future.