Skip to main content
24 HOURS OF REALITY: SPOTLIGHT ON SOLUTIONS AND HOPE STARTS NOW Join Us

Inside DOE's plan to halve solar costs by 2030

Solar energy is already cheaper than fossil fuels in most of the world. Now, the US Department of Energy wants to push the envelope even further.
August 3, 2021

Back in March, the US Department of Energy (DOE) made a quietly momentous set of announcements about the future of clean energy in the US.

First, that DOE aims to cut the cost of solar energy by 60% within the next 10 years. And second, that it’ll spend nearly $128 million over that time to lower costs, improve performance, and accelerate the deployment of solar energy technologies.

In between those figures and the 10-year time frame, it might be easy to lose one core fact: this is actually a really, really big deal. Not just for the US solar industry, but for the global transition to clean energy and – by extension – the global climate fight.

First things first, why is DOE betting so heavily on solar?

US Secretary of Energy Jennifer M. Granholm explained it best: “In many parts of the country, solar is already cheaper than coal and other fossil fuels, and with more innovation we can cut the cost again by more than half within the decade.”

She’s right. The cost of solar has fallen drastically year after year, and as it has, its scalability has steadily grown. That’s both in the form of solar photovoltaic (PV) – i.e. solar panels – and concentrated solar power (CSP), which uses mirrors to concentrate the sun’s heat to power steam turbines that then create electricity.

This investment, Secretary of Energy Granholm elaborated, “will help us add even more affordable clean energy to the grid, jobs to communities across the country, and will put us on the fast track toward President Biden’s goal of 100% clean electricity by 2035.”

In short, DOE is throwing the agency’s very significant weight behind solar because it can help us massively reduce our greenhouse gas emissions as the climate crisis demands and significantly cut electricity costs around the country.

THE GOAL IN CONTEXT

Looking to cut the price of solar in half is an ambitious goal, but it’s not a first. In fact, we’ve seen it happen repeatedly just over the past decade.

Inspired by President Kennedy's 1962 "Moon Shot" speech, back in 2011, DOE launched the first Sunshot Initiative: a challenge to “reduce the total costs of solar energy by 75 percent, making large scale solar competitive with other forms of energy by the end of the decade.”

And like the Moon Shot itself, the Sunshot Initiative ended up being a remarkable success. The per-kWh cost of utility-scale solar photovoltaic power fell from $0.28 in 2010 to $0.06 by 2017! 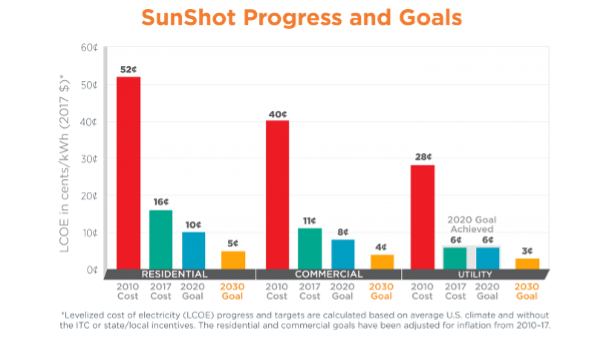 Source: US Department of Energy

Ultimately, this decrease in cost has helped solar to compete against other energy sources. In the US, for example, solar’s share of total US electrical generation grew from just 0.1% in 2010 to over 3% today. What’s more, solar is the fastest-growing generation source in the country, making up 43% of all new electric capacity added to the grid in 2020.

Looking ahead, as the Sunshot Initiative continues, DOE aims to cut the per-kWh cost of utility-scale solar photovoltaic power from $0.06 as it stands today, to $0.03 by 2030.

As DOE described in a statement, the funds are being allocated to the following endeavors:

Together, these investments present fantastic promise for the future of solar!

JOIN THE MOVEMENT FOR SOLUTIONS

This summer, historic floods, heatwaves, and wildfires have made two things clear: that the climate crisis is here and now, and that as long as we keep burning fossil fuels, these impacts are only going to get worse.

But as developments like this DOE goal remind us, the power to change course and build a clean energy future is within reach.

If you’re ready to help, join the Our Climate Moment campaign and activists in Climate Reality chapters across the US working to pressure Congress to seize this historic opportunity. Chances are, there’s a chapter in your community.

Alternatively, join our activist email list today. We’ll keep you posted on the latest developments in climate policy and what you can do to help solve the climate crisis!