“Unprecedented” is a word that’s been thrown around a lot lately.

Unprecedented fires in the American West, Siberia, and the Amazon. Unprecedented flooding in the US and Europe. Last year’s Atlantic hurricane season featured an unprecedented number of named storms – several of which intensified so rapidly it was, you guessed it, unprecedented.

But the humanitarian crisis unfolding right now in southern Madagascar defies even that frightening word. “Catastrophic” seems far more apt when tens of thousands are already starving and over a million more are on the brink of it.

All because the rains never came.

The reason why is familiar to those who’ve lost homes and loved ones to forest fires and air pollution, pets and hard-worked pastures to powerful hurricanes and flooding.

And the tragedies unfolding in Madagascar and elsewhere right now could serve as a preview of what’s in store in even more places around the world as our climate rapidly changes – unless we act now to stop it.

The country is in the throes of its worst drought in 40 years.

The United Nations reports that nearly 14,000 people are currently enduring “catastrophic conditions.” They are living under what is internationally recognized as an IPC Level 5 famine – a declaration made when “an area has at least 20% of households facing an extreme lack of food, at least 30% of children suffering from acute malnutrition, and two people for every 10,000 dying each day due to outright starvation or to the interaction of malnutrition and disease.”

And that number is expected to double by October.

All told, over 1.14 million people in the region are considered food insecure, and desperately need emergency food and nutrition assistance. 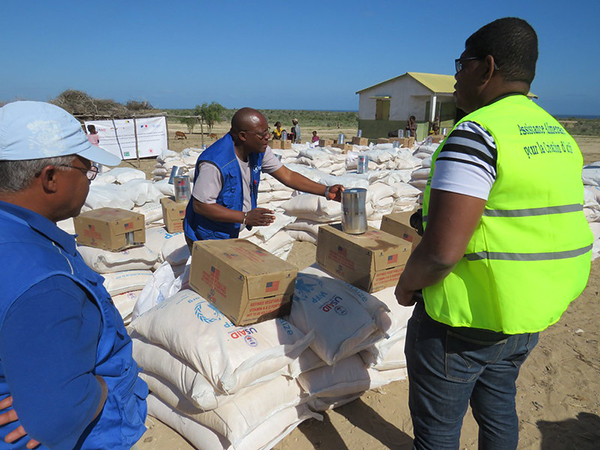 The unfolding catastrophe in Madagascar is unique, however, in one important way. According to the World Food Program, Madagascar “is the only place in the world today where ‘famine-like conditions’ have been driven by climate not conflict.”

That’s right. The climate crisis is putting millions of people at risk of starvation. Not tomorrow. Not a few years down the road. Today. Right now.

Time Magazine’s headline on the situation puts it as plainly as it gets: “Madagascar's Famine is the First in Modern History to be Solely Caused by Global Warming.”

And sadly, southern Madagascar is expected to grow even hotter and experience more frequent drought as our climate continues to warm.

The situation in Madagascar is an example of the climate crisis doing what it does best: amplifying an existing climate problem.

It’s true that southern Africa and Madagascar are historically dry. And that the region has experienced drought before. So, what’s different this time around?

The duration and severity of the current drought bear the dirty fingerprints of human-caused (and thus human-solvable) climate change.

Carbon pollution from burning fossil fuels like coal, oil, and natural gas is warming our planet and throwing natural systems out of balance – to often devastating effect. And while droughts can have different causes depending on the area of the world and other natural factors, scientists have started to link more intense droughts to climate change.

That’s because as more greenhouse gas emissions are released into the air, causing air temperatures to increase, more moisture evaporates from lakes, rivers, and other bodies of water. Warmer temperatures also increase evaporation in soils, which affects plant life by parching the land and can reduce rainfall even more.

It’s a dangerous feedback loop: “Higher air temperatures not only encourage drought conditions to build but also intensify them. What might have otherwise been a mild or moderate drought in a cooler world will become, in a warmer world, more severe as a result of increased evaporation.” (via Yale Climate Connections)

The crisis in southern Madagascar highlights the climate injustice playing out across the planet – all around the world, the people least responsible for the climate crisis are paying the highest price for inaction.

One of the many sad truths of the climate crisis is this: Globally, those suffering the most from climate impacts like sweltering heat, never-ending drought, and ever-more powerful storms are overwhelmingly people of color in poorer nations that contribute little to the GHGs driving climate change.

Indeed, the majority of the 10 countries hit hardest by climate-fueled extreme weather from 1999-2018 are also on the list of the world’s least developed nations.

Does that seem fair to you?

It’s injustice, pure and simple. And it’s got to stop.

"This is unprecedented. These people have done nothing to contribute to climate change,” a representative of the UN World Food Programme told the BBC. “They don't burn fossil fuels… and yet they are bearing the brunt of climate change.”

But What Can I Do?

You can join the fight for environmental and climate justice for all, that’s what!

It starts with signing up now to receive emails from The Climate Reality Project.

Because it’s time to fight.

For a world where we all breathe clean air and drink safe water. For a future where people of color and poor families no longer suffer the worst of climate change while the wealthy look away. For good jobs and real opportunities for all.

No matter what we look like or where we come from.

Be the first to take real climate action when it matters the most. Sign up now.