Climate-conscious Americans have the numbers to shape US politics – if only they treated the climate crisis the same way they treated issues like the economy and national security. The proof in seven stats.
May 29, 2018

In between all the cable news shouting matches and Facebook comment wars that have basically reduced most cultural debates to a version of Laurel/Yanny, there is one thing most Americans actually agree on.

That thing: We’ve got to solve the climate crisis.

No, really. After all, Quinnipiac University researchers recently reported that 63 percent of American voters believe the US should be doing more to address climate change.

At a time when we can’t seem to agree on much of anything, that’s Americans across party lines (and granted, not uniformly) agreeing on one huge thing. That’s the next sleeping giant of American politics just lying there, with the size and force to remake our cultural landscape. To get something big and bold done.

Consider this: We live in a time when an organization with maybe 5 million members has been able to strike the fear of whatever divinity you believe into Congress. Where the Tea Party – which at its height had only 32 percent support – helped drive a takeover of the House in 2010 and continues to exert influence far beyond its numbers. (Albeit with millions in Koch Brothers support.)

Now imagine what a majority of Americans could do on climate if even a fraction of that number got vocal and got behind officials committed to a just transition from fossil fuels?

Because with that kind of support, the real question isn’t “Can Americans leave fossil fuels behind?” It’s “Why haven’t we done it yet?”

Still not convinced? Here’s the proof in seven stats.

Americans Care About the Climate 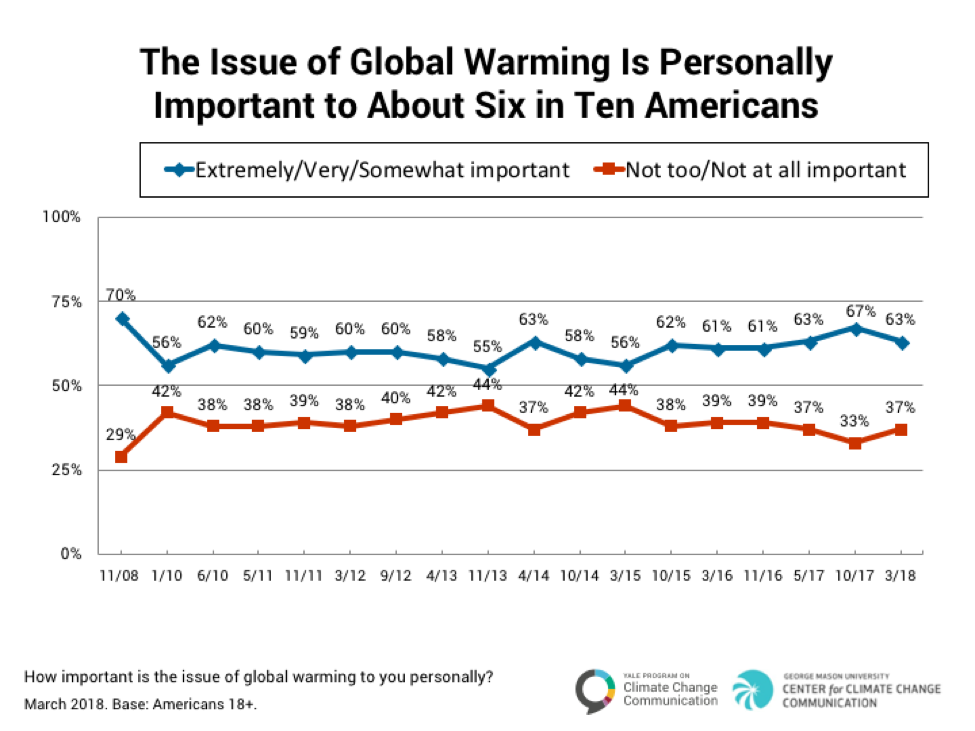 Six in 10 Americans (63 percent) say global warming is personally important to them, according to a March 2018 survey by Yale and George Mason University researchers.

Stepping back from the numbers and into everyday life, this means that chances are, most of the people you know care about climate. Your neighbors, your colleagues, your friend and, most importantly, a lot of people you disagree with on almost everything else.

That’s not all. Researchers found that the number saying the issue is personally important has risen seven points from March 2015.

Six in 10 Americans (62 percent) are very or somewhat concerned that climate change will personally affect them or a member of their family, Quinnipiac University pollsters reported in March 2018.

What does that mean? When Americans take something personally, they want their elected officials to act accordingly. 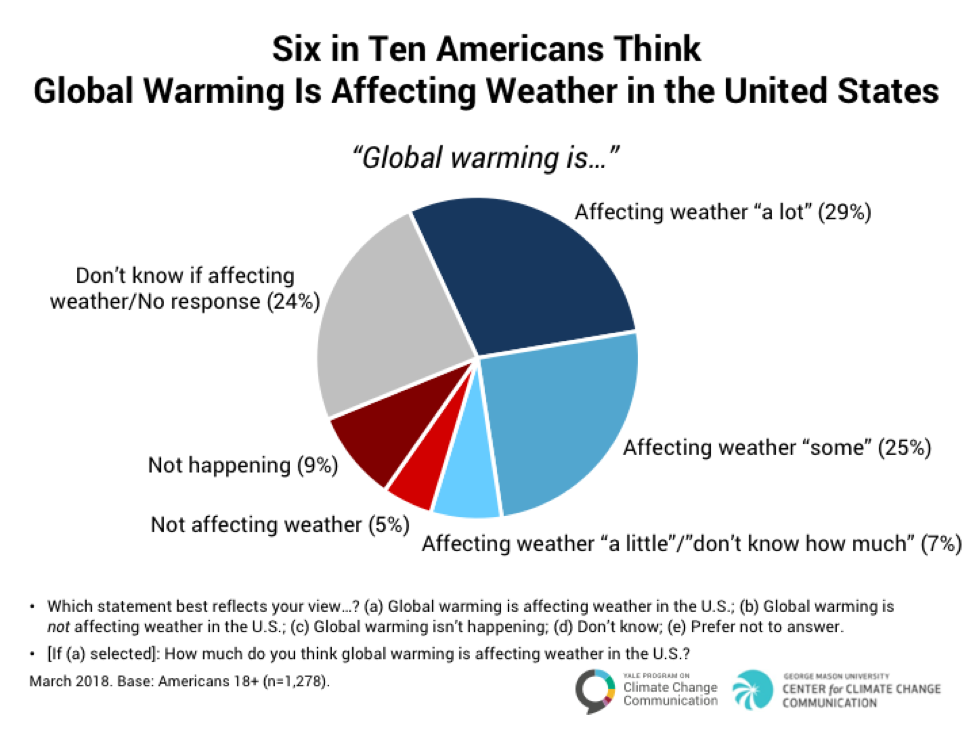 Not somewhere far away or years in the future. Right here, right now. 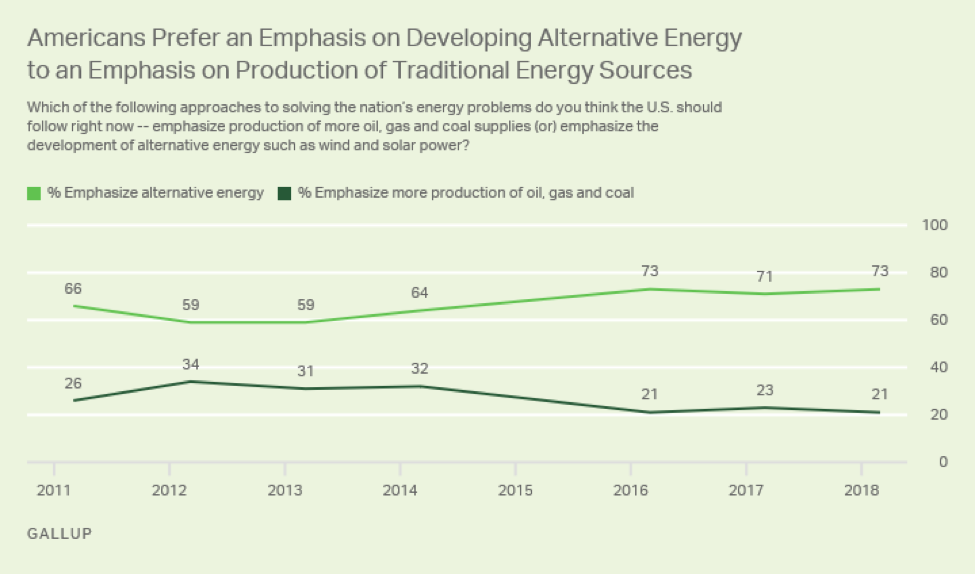 Even Americans who aren’t as concerned about climate change agree that we should power the country with clean energy and not dirty fossil fuels. In fact, seven out of 10 Americans support prioritizing renewables over oil, coal, and natural gas, according to an April 2018 Gallup poll.

This might be the most important number of them all. Because it shows that even people who are not yet worried about climate change still support the clean energy and sustainability economy that’s putting over 4 million Americans to work while cutting emissions in a big way.

And when it comes to a clean energy economy, it doesn’t matter why we get there. It just matters that we get there.

When the rubber hits the road, Americans want more efficient cars that save fuel costs and pollute less.

Witness: Under the Obama Administration, the Environmental Protection Agency (EPA) and National Highway Traffic Safety Administration announced guidelines that would bring average fuel efficiency across an automaker’s fleet to 54.5 miles per gallon for model year 2017—2025 vehicles.

These standards were poised to make a big dent in US fuel costs and emissions, preventing an estimated 6 billion metric tons of carbon pollution from entering the atmosphere – or as much as 1,746 coal-fired power plants emit in a year.

Not surprisingly, these standards were broadly popular. When the new administration’s EPA announced it would review and replace them with much less ambitious targets, six in 10 Americans (65 percent) opposed the move and supported keeping the stronger standards in place, according to a 2018 Global Strategy Group study.

The Paris Agreement is the world’s first global deal to combat climate change – and Americans are solidly behind it.

So when President Trump announced the US would leave the agreement, nearly six in 10 Americans opposed the move, according to a June 2017 Washington Post – ABC News poll. So did over 2,700 business, education, and political leaders who together represent 160 million people across 50 states and $6.2 trillion in economic impact, declaring “We are still in.”

Young Americans Get It 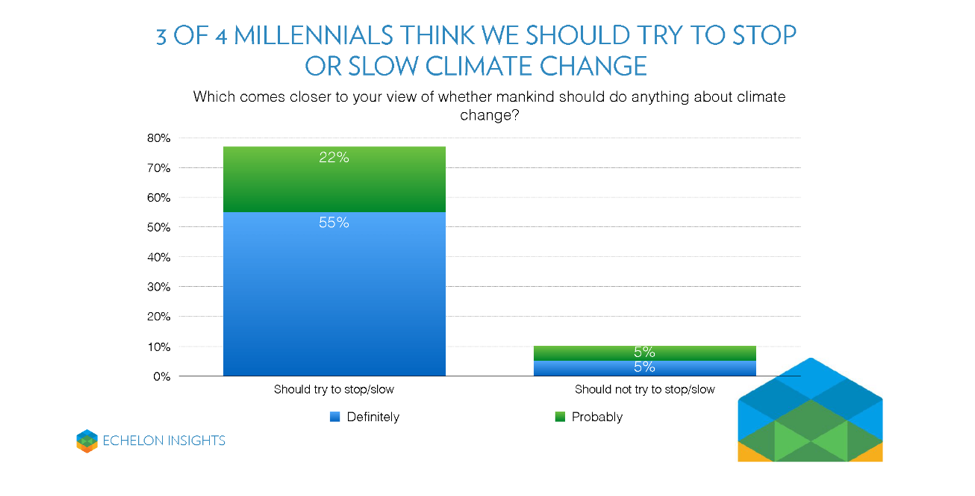 Whitney Houston was right: The children are our future. According to a January 2018 poll by the Alliance for Market Solutions and Echelon Insights, three out of four millennial Americans (77 percent) believe we should work to stop or slow climate change.

But We’re Not Talking About It 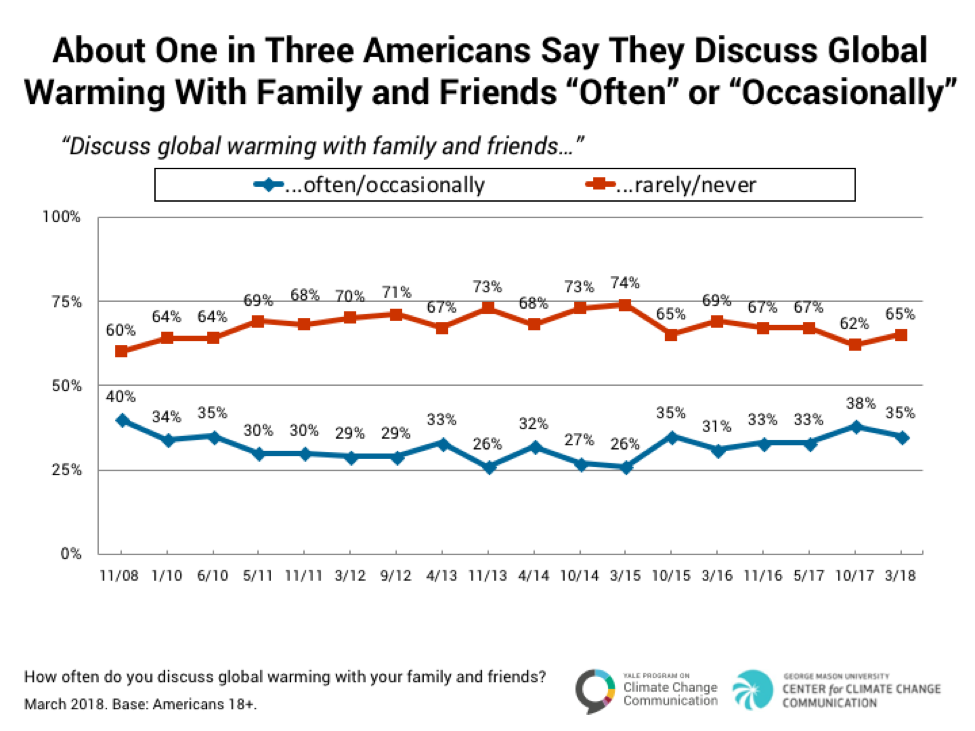 So here’s the catch and one big reason that tribal loyalties and dark money from fossil fuel interests can sway politicians in the face of overwhelming public opinion.

We’re not talking about the climate crisis enough. Not in any regular way and not with the kind of numbers that really motivate politicians.

Only one in three Americans (35 percent) talk about climate change with their friends and family often or occasionally, according to Yale and George Mason researchers.

But whatever the reason, this has to change and we have to start talking about the climate the same way we talk about other huge issues like the economy and national security if we want politicians to notice. And we have to get behind the ones that do to send a clear message to the rest: This matters to all of us.

Putting It All Together

So here’s the bottom line: the majority of Americans care about climate and want the government to act. Even more important, many of those that don’t care about the climate are still behind the clean energy solutions we need to solve the crisis.

Maybe best of all, the overwhelming majority of young Americans want action on the climate crisis. After all, it’s their future the big polluters are messing with.

So what can you do? First, add your name to the Climate Majority and we’ll show politicians that Americans of all political persuasions and all walks of life care deeply about our climate. Together we’ll show them that climate must be the issue they respond to, if they like their office. Because we have the numbers to do it.

Second, start talking to the people in your life about climate. Let them know this matters to you and that we actually have the broad popular support to make DC listen.

We have this story in America that the will of the majority should win at the end of the day. We are the majority, the Climate Majority. It’s time to speak up together and win.