The Southeastern United States faces some of the most severe climate impacts of any region in the country. Fortunately, Climate Reality Leaders are stepping up with urgently-needed grassroots action.
October 25, 2019

A study published recently in the journal Science presented troubling news for the Southeast. As a review of its findings describes, “climate change will actually affect the Southeast disproportionately to the rest of the United States, particularly with regard to economic productivity.”

In layperson terms, what the report said is that — should current greenhouse gas emission trends continue — climate change will overall hit the Southeast harder than any other part of the country.

What’s more, as the review went on to explain, those already most vulnerable will suffer the most from these escalating climate impacts: “the worst-impacted counties – the poorest third, mostly in states that already have warm climates like the Southeast – could see economic losses equal to 10 to 20% of yearly Gross Domestic Product (GDP) or more if emissions continue to rise unchecked.”

So far, many Southeastern states have been in denial of the danger, which has ultimately led to climate policies that lag behind the rest of the country. This lack of preparation combined with escalating threats is putting many in the region in an increasingly precarious position.

So, exactly what risks does the region face?

You don’t have to pore over a scientific paper to see how the climate crisis is impacting the Southeast. At this point, you just have to keep up with the news.

Long story short, the Southeast faces a variety of the most severe climate challenges of any region in the country, all while being the least prepared to cope with them. For these reasons, strong climate action in the region could not be more pressing, and dedicated leaders could hardly be more needed.

CLIMATE REALITY LEADERS ARE STEPPING UP

There is good news here.

Today, as the federal government and politicians in the pocket of the fossil-fuel industry continue to ignore the science, it’s cities and states that are steering us back on track to solve the climate crisis. Furthermore, it’s everyday people that are pushing those cities and states forward.

We recently had the opportunity to speak with some of these inspiring people. Specifically, these Southeastern Climate Reality Leaders who are doing remarkable work to secure a safe climate for themselves and for people all over the world.

Mayukh is originally from Kolkata, India, but he spent the second half of his childhood in Kosciusko, Mississippi — a rural town on the border of the Mississippi Delta. He attended the 2018 Climate Reality Atlanta training and soon after became the president of the Climate Reality Project Campus Corps chapter at Mississippi State University. There, he and his colleagues are “campaigning aggressively to bring 100% renewable energy to Mississippi State University by 2030” — news that we’re excited to hear!

At the moment, he and his chapter are planning a climate march at MSU’s hometown of Starkville, Mississippi, as well as a community climate education event. Beyond those Climate Reality initiatives, Mayukh is spearheading two outstanding projects.

First, he is the founder and co-director of Feeding the Future Mississippi, a nonprofit he created to address food insecurity in Durant, Mississippi, a rural, predominantly African American community in the Mississippi Delta. Additionally, Mayukh is a board member for a grassroots environmental and climate justice organization known as EEECHO (Education, Economics, Environmental, Climate and Health Organization). This group, which is based in Gulfport, Mississippi, works to educate the local community on flood justice and climate change.

Meredith Bain, who grew up and lives in North Carolina, became a Climate Reality Leader in 2018 in Los Angeles. She’s primarily interested in energy policy and environmental justice, as clearly demonstrated by her current role working with Environment North Carolina Research & Policy Center. There, she promotes and supports clean energy legislation across her state.

Her current position, however, is very much a continuation of a long, dedicated climate-activism journey. While attending North Carolina State University Meredith worked with her school’s Climate Reality Campus Corps chapter to push forward a variety of initiatives and persuade her university administration to adopt more climate-friendly policies. Specifically, Meredith advanced a proposal showing her university how recent state legislation could make increased renewable energy use more feasible.

Looking back, Meredith describes how “The proposal we had on the clean energy is probably what I’m most proud of from college because everybody was telling us no, it’s impossible, you can’t have renewable energy on campus because we have all these big cogeneration fracking gas plants and it’s too expensive to install solar… but ultimately we worked together with the utility company and found a way to include more solar.”

Her efforts went above and beyond her university gates, however. She also teamed up with students from schools across the North Carolina public university system to push for statewide fossil fuel divestment. 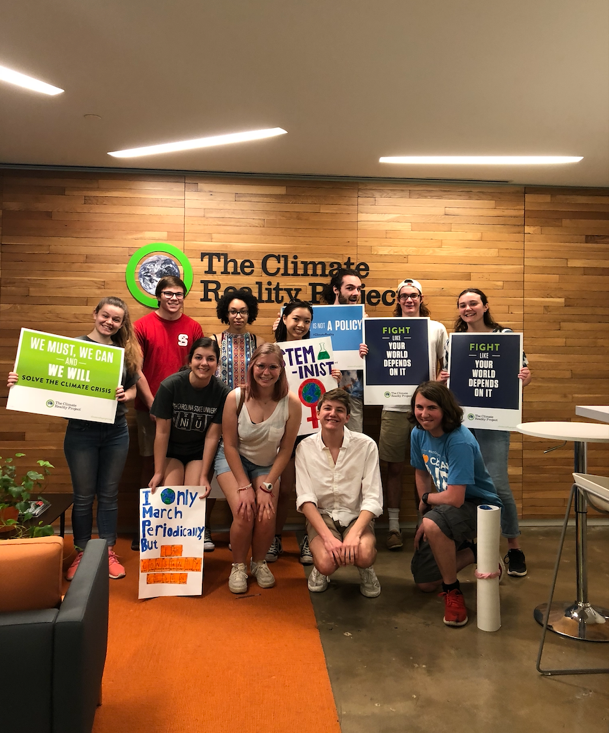 Sarah and Terri trained together as Climate Reality Leaders in Pittsburg in 2017 and established Climate Reality’s Charlotte, North Carolina Chapter in 2018. They hit the ground running and haven’t stopped since.

Along with their chapter’s leadership board, which includes 12 very hard-working members, Sarah and Terri have worked on a wide variety of initiatives, including:

Needless to say, Sarah, Terri, and their whole chapter have been making real progress on climate solutions for Charlotte and the state of North Carolina. What’s most noteworthy, however, is their commitment to a just renewable energy transition that includes all communities.

Environmental justice, as Sarah explained, is at the core of their initiatives:

“What I’ve learned going into this work is that in the South there is so much racial disparity… [H]ow do we communicate this issue to communities of color when their basic needs aren’t being met? You have your affluent white communities that are responsible for the carbon emissions, but the communities of color are the ones that are paying the price for it because the infrastructure is built through their neighborhoods. They’re the ones that are experiencing health disparities, which then impacts graduation rates and other important outcomes... if you’re going to do this work in the South, you have to center EJ (Environmental Justice) work… not only because it’s important and because it’s the right thing to do, but because that is how you show communities that this issue (climate change) impacts them.”

Kia Howard attended Climate Reality’s 2018 Atlanta training and is now completing an earth science master's program at North Carolina Central University. Being part of an HBCU, she found it important to bring her voice and that of her university community into the climate change conversation.

Today, she and her colleagues are working on a couple of different climate action campaigns, including:

Hailing from Louisiana — a coastal state that faces various climate threats — Kia describes how “Climate change is making the ocean warmer. In Louisiana, being so close to the Atlantic, we really need more climate adaptation, so I think just bringing more education and awareness to highlight these areas is very important. That’s why I wanted to get involved”.

In Lauren’s own words the group is “currently small but mighty.” Mighty, for sure, as the chapter took the lead in organizing a city-wide march as part of the historic Global Climate Strike on September 20.

As Lauren describes, “We connected with various groups around the city – community members, churches, schools, activist organizations to help spread the word – then we had some planning meetings online and started checking things off the list. In the end, the event ended up being a lot bigger than I thought it would be… I anticipated maybe a hundred people to come out but it was an incredible turnout. Some estimates put it at as much as four hundred for our hour and a half event, which to me was really powerful.”

Along with that protest, Lauren and the chapter are collaborating with local businesses to amplify city-wide climate awareness and action, as well as beginning plans for a Chattanooga 100% Committed campaign to push the city to embrace renewable electricity. 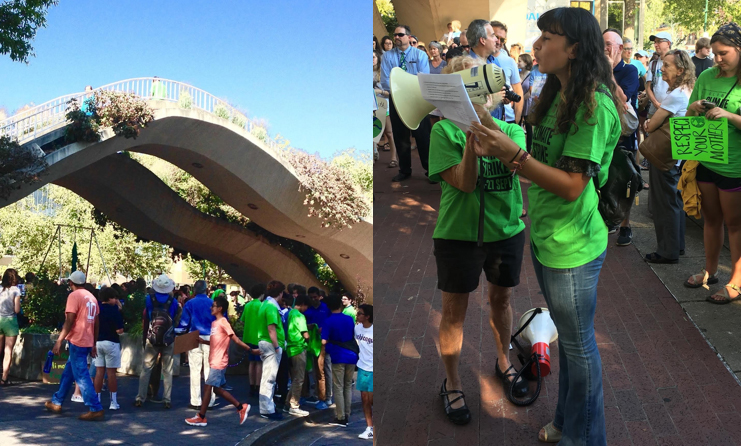