What are Climate Forcings?

There is nothing natural about what our planet is currently going through.

If you haven't experienced the impacts of climate change yet, consider yourself fortunate. The greater likelihood is that it has affected you, and you didn’t even realize it because extreme weather and record high temperatures have been so normalized.

But if you want to get to the bottom of things, let’s start by talking about climate forcings. Climate forcing is a general name for the human or natural factors that impact atmospheric levels of carbon dioxide and temperature – which have a cascade of other climate impacts.

There are both natural and anthropogenic (human-generated) climate forcings that have the potential to explain the rise and fall of carbon dioxide (CO2) levels and global temperatures. To be clear right up top, it's human activities -- and not natural forcings -- that have resulted in the increased atmospheric greenhouse gas levels that are the real culprit behind the climate crisis.

When climate deniers say, "It's cyclical," this is what they are talking about.

But according to NASA, Milankovitch cycles cannot account for the current period of rapid global warming since the pre-Industrial period, and especially since the mid-20th century. These cycles have minimally changed the amount of solar energy absorbed by Earth over the last 150 years.

Another natural forcing is the variation of solar activity. But the fact that Earth’s recent warming trend does not correspond to solar output or the amount of solar energy that reaches our planet, we know that the sun is not causing climate change.

Volcanoes are quite literally forces of nature, but not ones that are currently heating the atmosphere.

The smoke and ash from a volcanic eruption accounts for a relatively miniscule amount of global carbon emissions. Even as eruptions fluctuate in exactly what they send up into the atmosphere, they haven’t released nearly as much CO2 as we have.

In fact, the sulfate chemicals emitted from volcanoes have been proven to have a global cooling effect because they can block incoming solar radiation.

The cause of climate change cannot be linked to any single natural climate forcing, nor a combination of natural forcings.

All of which is to say, there is nothing natural about what our planet is currently going through.

Actually, it’s the opposite of natural. Human activities are undoubtedly the reason for the grotesque levels of CO2 in our atmosphere. The amount of CO2 emitted since the Industrial Revolution is unlike anything recorded throughout human history.

CO2 is the primary greenhouse gas we talk about in relation to climate change, but methane, nitrous oxide, and fluorinated gases (F-gases) should all get honorable mentions.

Greenhouse gases consist of both natural and artificial gases that retain the sun’s radiation on Earth through the greenhouse effect, making the planet hotter. The greenhouse effect itself is a natural phenomenon. It regulates the Earth's temperature, keeping it warm enough for us to thrive.

The naturally varying cycles of Earth's temperature act as the baseline for our climate.

Historical CO2 levels correspond closely to global temperatures. As you can see in the graph below, the amount of CO2 in our current atmosphere is unprecedented. Since the Industrial Era began, the amount of carbon dioxide in the atmosphere has increased from about 280 parts per million (ppm) to nearly 415 ppm in 2021. The Earth’s average surface temperature has risen right along with it by about 1.8°F (1.0°C). Let's just say, the "cycle" has been broken. 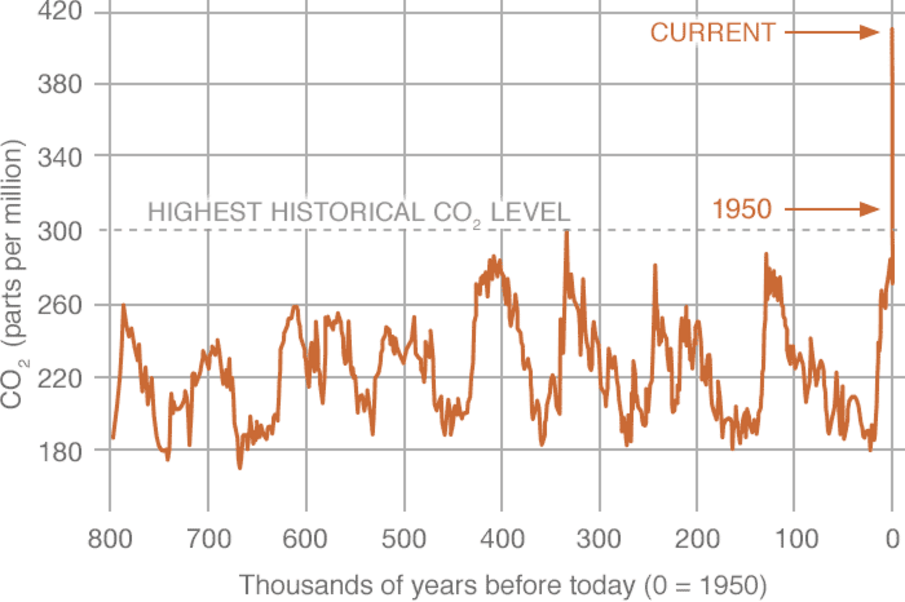 What Can We Do?

The Paris Agreement aims to limit global warming to well below 2 degrees Celsius, with a goal of 1.5 degrees C. The difference between 1.5 and 2 degrees C may not seem like a lot to you, but it really is a matter of life and death. To put things in perspective, the last Ice Age was only 5 degrees colder compared to today. Just imagine the impact of 2 degrees of global warming on our environment, our health, and our livelihoods. It is so important to reduce greenhouse gases, especially carbon, as much as possible in order to limit that warming to 1.5 degrees. With that being said, we'll take 1.5 over 2 degrees every day of the week!

So, the next time a climate denier uses snow as their evidence of disbelief or dismissal, remember that cold weather doesn’t disprove global warming, and neither do historical natural disasters. Seasons are natural and should not be confused for climate change. Remember the five words that will rest your case:

Climate is different than weather.

This analogy by meteorologist Marshall Shepherd has always helped us, “Weather is your mood, and climate is your personality.”

We all know that moods change very easily. But for your entire personality to change, some kind of outside force tends to be acting either with or against you.

Our planet is experiencing major mood swings right now, and a change in personality seems like it might not be far behind. We love our planet’s personality just the way it is! Let’s not change it for the worse.

Now that we know anthropogenic greenhouse gases are responsible, we need to do everything in our power to reduce that burden on the planet.

A push toward divestment from fossil fuels and a just transition to renewable energy is necessary. Non-renewable resources will run out eventually anyway, so we need a plan. Electric vehicles and solar panels must become the new norm. A paradigm shift is required in order to save the Earth, and it doesn’t all fall on the individual’s shoulders. It falls on our leaders, but it is our responsibility to speak out and hold them accountable.

Join us in the fight for solutions today!

On October 7, Hope Is on the Way

Why Bicycle Advocacy Must Go Beyond Infrastructure