What Role Can Geothermal Energy Play in the Energy Transition

The change we need won’t just happen on its own. The fight for the future of the planet is in our hands today.
February 17, 2021

Transitioning away from fossil fuels to 100 percent renewable energy is essential to staving off the worst effects of the climate crisis. Wind and solar are currently leading the charge – but they may only get us so far.

Yet, there’s a less-talked-about, underexplored renewable out there that can generate clean, baseload energy around the clock.

“Geothermal electricity is always on,” said Jefferson Tester, a professor of sustainable energy systems at Cornell University and a leading expert on geothermal energy. “It can provide fully dispatchable power or heat and is scalable in the same way other renewables are.”

What is Geothermal Energy?

Have you ever seen Old Faithful send a plume of hot water into the air, or daydreamed of relaxing near a natural hot spring? Well, have your ever thought about where all that heat comes from?

It originates in the Earth’s core and mantle, and as all that heat convects through the planet’s crust, it warms reservoirs of water at select locations and at various depths.

These geothermally warmed waters can be used in various ways to heat homes and generate electricity.

For most people, home heating is the first thing they think of when the topic turns to geothermal – and for good reason. Ground-source heat pumps and home geothermal heating systems are become more and more common in the US and around the world. To read more about this technology, check out this blog.

But from here on out, we’re largely focusing on the larger application of this renewable resource. When these waters become hot enough, the heat and steam they create have the potential to provide us with lots of clean, renewable electricity – and that could be a game changer in the fight for a more-sustainable energy future.

What is Utility Scale Geothermal?

"You think of renewable energy as a house, solar is the roof and the wind is the walls," says Jason Czapla, principal engineer for Controlled Thermal Resources. "But geothermal's the foundation.”

According to the Department of Energy, untapped geothermal resources in the United States could supply the equivalent of 10 percent of today's energy needs.

>> Free download: How Renewables Work: A Practical Guide to Solar, Wind, and Geothermal <<

There are a few different geothermal electricity generation systems, but dry-steam and flash-steam are the primary two.

Dry-steam power plants draw steam directly from underground wells into a turbine to generate electricity, but locations with ideal conditions are geologic anomalies, so future potential is limited.

The most common geothermal electricity comes from flash-steam power plants that use existing near-surface geothermal-heated water with temperatures greater than 360°F (182°C).

Flash steam is limited in its production capability as well as where it can be found. However, new developments in geothermal technology have drastically increased our ability to create new plants with enhanced geothermal systems (EGS).

Here is a quick illustration, from the DOE, how the various geothermal energy and electricity production systems work: 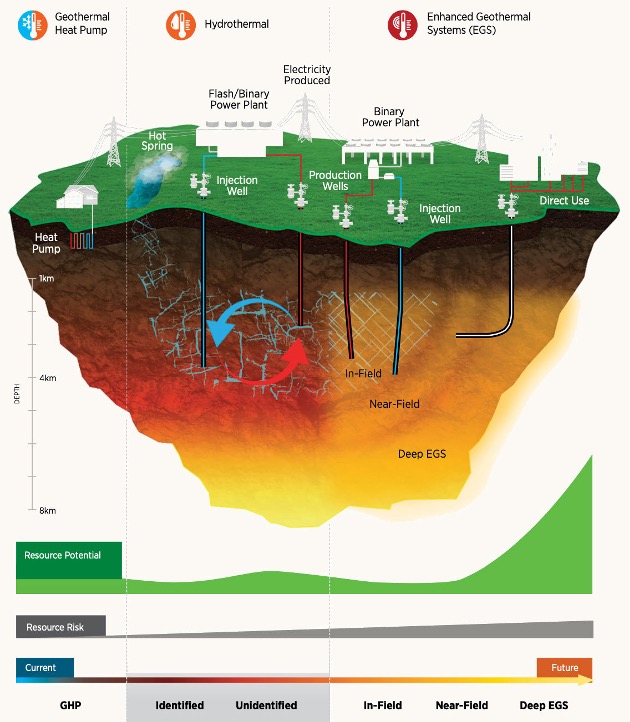 Historically, in order to provide geothermal energy, sites had to have three things: heat, water, and permeability. But for EGS, new geothermal fields can exist in the absence of underground water reservoirs.

In EGS, you drill down into the Earth’s crust and fracture a hot rock formation. Water is injected into the wells, heated by the rock, and returned back to the surface. The steam is then used to power a turbine or generator, and any excess water collected is sent back into the Earth to be reused.

The ability to tap into sub-surface heat from virtually any location is the Holy Grail of geothermal technology.

EGS is seen as the future of geothermal, but it is worth noting that its development does come with a high price tag. But if the same federal funding that was provided to the natural gas industry was provided to geothermal production, the potential to mirror natural gas’ success is possible.

With EGS, there are also some concerns about potential water contamination and the risk of induced seismic activity, as has been observed near fracking operations, which operate using some of the same techniques.

However, unlike with fracking, the fluids used to help create geothermal reservoirs are benign, so there is little danger of groundwater pollution. The worry about seismic activity is also minimal since geothermal fractures are smaller, more controlled, and under far less pressure than those in oil and gas fracking.

None of which is to say these concerns should not be taken seriously, investigated further, and regulated fully to make sure operations can truly call themselves green in every sense.

>> Free E-book: How Renewables Work: A Practical Guide to Solar, Wind, and Geothermal <<

“Additional incentives have to be set in place,” said Francisco La Camera, director general of the International Renewable Energy Agency. “It’s crucial that all the risk and the cost of the first phase are taken into account by policy makers to make geothermal more attractive.”

According to the US Energy Information Administration, new geothermal capacity in 2025 could cost just $37 per megawatt/hour, cheaper than almost every other source except solar photovoltaic (at $36 per MWh).

Where is Geothermal Energy Used Globally?

“In spite of its enormous potential,” say researchers at MIT, “the geothermal option for the United States has been largely ignored.”

The US produces 3.7 gigawatts (GW) of geothermal electricity, enough to power more than 1 million homes.

Iceland’s unique geological setting has allowed the country to supply 25 percent of its total electricity production from geothermal energy. And the homes of more than 90 percent of the country’s citizens are heated directly by geothermal.

Even China has begun to focus on geothermal power. Less than a decade after beginning its program to deploy geothermal energy on a massive scale, China has the largest amount of geothermal district heating of any country in the world.

What Can You Do?

“Geothermal fills a critical gap to complete the energy transition,” says Jesse Jenkins, an energy systems engineer at Princeton University, who estimates it could one day exceed the capacity of nuclear and hydropower.

But the change we need won’t just happen on its own, either. The fight for the future of the planet is in our hands today.

Are you ready to fight for better, cleaner energy in your community today? Join a local Climate Reality chapter and take action where you live when it matters the most.

This is our moment. Let’s not waste it. Find a chapter near you now.