For many climate activists, there is one day in April that feels like our Super Bowl, our championship, and our Oscar-winning speech all in one: April 22. Most everyone knows it as Earth Day, a day that encourages people to advocate for protecting our one and only planet.

However, for some activists, April 22 is only the beginning for a week of intentional climate action. From April 22-May 1, Interfaith Power & Light (IPL) hosts Faith Climate Action Week.

Interfaith Power & Light is an action network that is mobilizing a religious response to global warming. The network expands across all 50 states and has grown enormously over the years.

One of the network’s initiatives, Faith Climate Action Week, has now reached almost 2 million people with more than 5,000 climate and Earth stewardship sermons.

Here’s everything you need to know about this year’s Faith Climate Action Week and what faith-centered climate activism can look like.

Diving into the Week

Faith Climate Action Week spans over a 10-day period (ok, so week-plus). Within the 10 days, various events are held in participating states and the events may look different depending on location.

For example, in Washington, DC a Fight for the Future rally took place on April 23.  Not only were faith leaders there but many of our Climate Reality Leaders and staff attended the rally as well. Events like these bring a variety of climate activists together for one common goal: rallying for our climate. 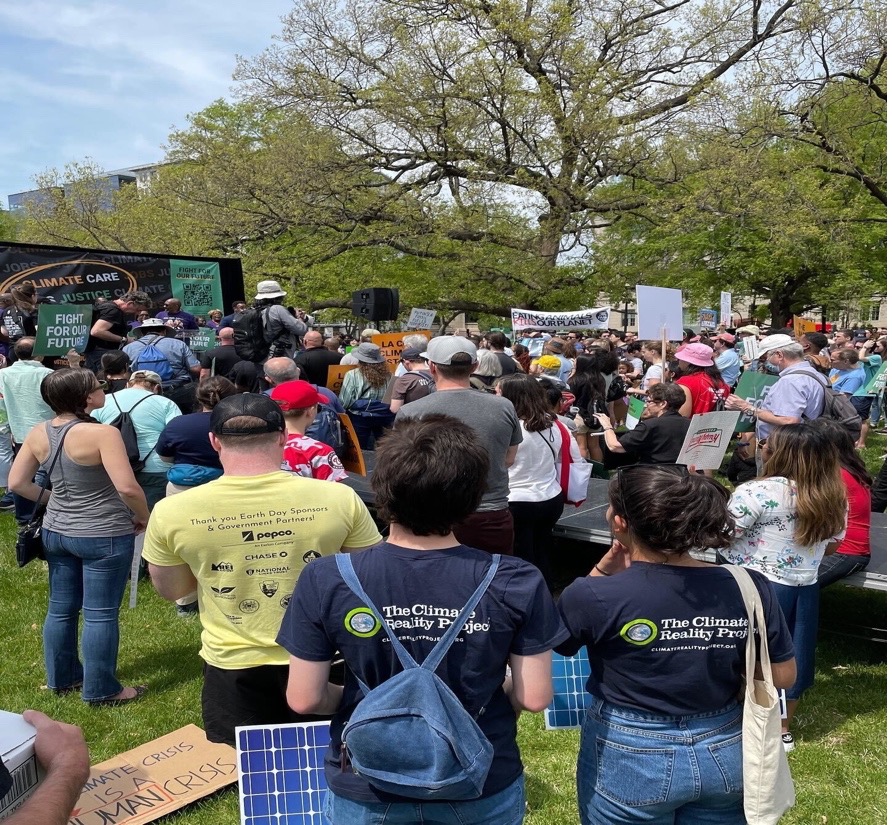 In North Carolina, faith groups such as the North Carolina Council of Churches and Interfaith Power and Light are urging churches to invest in Duke Energy’s solar panel rebate program. The program expires later this year and could help faith groups save thousands in energy costs.

Other events throughout the week include: the Nationwide Climate Prayer that features prayers from various faiths on Earth Day at Noon.

IPL even put together a list of easy steps for congregations to get involved throughout the week.

One of the interesting ways they encourage congregations to participate is by hosting a movie screening to inspire discourse amongst the congregation.

On April 27, IPL hosted a webinar to discuss this year’s chosen film, "Youth V Gov.” The film is especially on brand with the week’s chosen theme being: “Sacred Trust: Our Children's Right to a Livable Future.”

IPL has also put together a list of all the events going on throughout April and May that even go past Faith Climate Action Week.

Faith Climate Action Week gives faith communities the opportunity to not only cultivate climate activists in their own congregations but also encourage individuals who are outside of the community to join in.

In 2o21, results from a poll showed that Christians and Non-Christians alike believed that passing a bill to address climate change and its effects should be an absolute priority for Congress.

We’d like to think so however, what can religious groups do exactly to encourage meaningful climate action? Let’s dive into what some groups have been doing already.

Faith communities historically have played a significant role in igniting social change throughout the US. For example, the civil rights movement was spearheaded by Black religious leaders who inspired moral courage amongst their congregations and even ones outside of them.

From research throughout the years, we know that environmental racism is real and it’s prevalent still today. Black communities face more pollution at substantially higher rates than white ones.

However, many Black churches are taking this knowledge and using it to encourage climate activism within their communities.

For example, the National Religious Partnership for the Environment put together resources for Black churches to use and inspire change within their congregations.

The National Council of Churches created a curriculum that specifically engages with those in Black churches and discusses climate justice within the Black community.

In 2018, an EPA study found that people of color overall had a 28% higher health burden than white communities.

It’s not just Christian congregations responding to this kind of injustice either. People of color from many religions are striving to inspire climate action and encourage hope within their groups.

For example, in 2020 a group known as Hindu Climate Action formed to encourage temples to be less wasteful during religious festivals. The group believes that even the smallest efforts are making a difference in protecting our Earth.

Meaningful climate action does not have to be a grand gesture – by simply inspiring individuals to care about our climate is immensely helpful in securing a better future for all.

Faith groups across the nation are doing just that.

Many faith groups are advocating for climate action now. However, much of the advocacy is happening on a local level.

Here at The Climate Reality Project, we work with communities of faith through our Climate Speakers Network (CSN). CSN’s goal is to awaken unique communities – including the faith community – as unstoppable forces for action to protect the planet we share.

CSN focuses on building relationships and partnerships with faith communities to help amplify their voices and mobilize their communities to inspire change.

One particular partnership is with Faiths 4 Future: a group that was created by faith leaders who had attended a Climate Reality Leadership Corps training in 2020.

By engaging with this group, an exciting program has emerged called the Climate Café Multifaith. The program modeled after the Climate Cafés initiative that began in Scotland in 2015.

The Climate Café Multifaith is a space for learning, reflection, and peer support convened virtually the first three Tuesdays of each month at 11AM PT/2PM ET.

The weekly topics and speakers vary but are grounded in how faith communities can learn about and engage in climate justice work, and how faith leaders can support one another in these efforts.

Check out the links above to find out more if you want to participate.

To find out more on CSN and stay up to date on action done by faith communities sign up for our email list.

Ten Key Facts to Know about the Climate Crisis

Why COP 26 Can Still Be the Start of Something Big