Get the Facts: Why Are Sea Levels Rising?

As our world becomes warmer and warmer, our seas will continue to rise. That’s because the number one cause of sea-level rise is climate change.
October 31, 2018

Of all the impacts of climate change, sea-level rise may be one of most well-known – perhaps because of its popularity in TV shows and blockbuster movies.

But – surprise, surprise – reality is a little more complicated than the movies. Don’t worry – we’ve got the facts. Here are your questions about sea-level rise, answered.

We can talk about sea-level rise in two different ways: relative sea-level rise and absolute sea-level rise. The Environmental Protection Agency (before it was headed up by climate deniers and industry lobbyists, that is) defined it well:

Remember: Our oceans do not work like a bathtub or sink: when you fill up a tub with water, the water rises steadily. But research has shown that seas actually rise unevenly – putting some communities even more at risk than others. Relative sea levels are different because local factors are at play, like land subsidence (or sinking) and wind and ocean circulations. 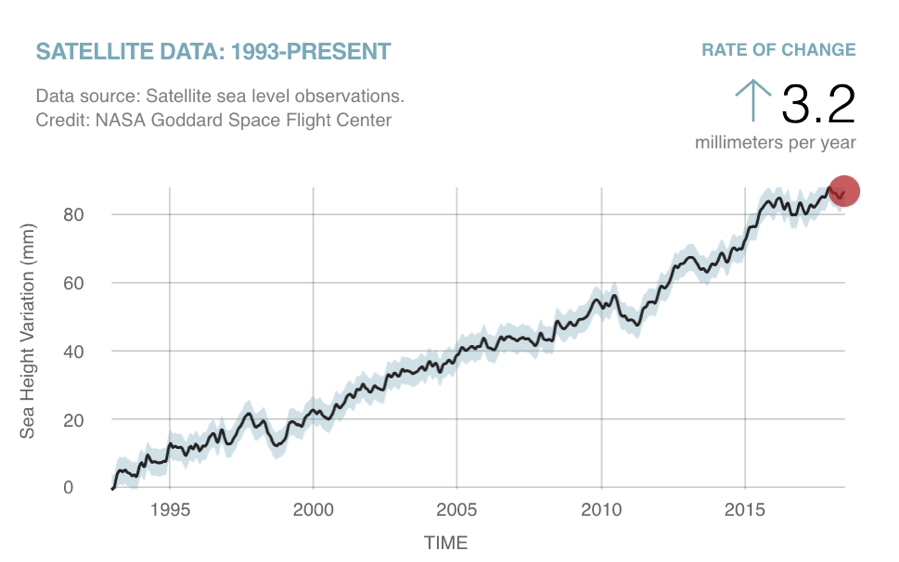 Change in sea level since 1993 as observed by NASA satellites. (Source)

Why Are Sea Levels Rising?

We can’t overstate this: As our world becomes warmer and warmer, our seas will continue to rise. That’s because the number one cause of sea-level rise is climate change.

As humans burn fossil fuels, we add more and more greenhouse gases (like carbon dioxide) to our atmosphere. These gases trap heat sort of like a blanket (or a greenhouse — that’s why it’s called the greenhouse effect) and make our world heat up.

Why Is Sea-Level Rise Bad?

Get this: Eight of the world’s 10 largest cities are located near a coast. As sea levels rise, millions of people around the world are affected by increased coastal flooding and coastal erosion, as well as higher storm surges moving further inland.

According to the latest report from the Intergovernmental Panel on Climate Change, if we can limit warming to 1.5 degrees Celsius (instead of the 2 degree target many policymakers use) by 2100, we’ll see slower sea-level rise and give vulnerable island nations and coastal communities more time to prepare and adapt. We have the power to determine what the future looks like for future generations, and it’s our responsibility to use it.

What Can I Do?

Download our free fact sheet on sea-level rise – then, use it to talk to people you know about sea-level rise, climate change, and why we should take action. Our fact sheets are simple and straightforward, making it easy to understand complicated issues quickly.

If you want to branch out, we also have fact sheets covering renewable energy, fossil fuels, and the connections between infectious disease and the climate crisis.