Pacific island nations are home to millions of people and span millions of square miles of ocean. Hundreds of languages are spoken across thousands of islands and each nation has its own unique cultures and traditions.
March 14, 2019

But at least one thing unites all these people and places: the climate crisis threatens their future. That’s why we’re headed to Brisbane, Australia this June to train people from the Pacific islands – as well as Australia, New Zealand, and countries across the Asia Pacific region – to become Climate Reality Leaders and lead the fight for climate solutions wherever they call home.

Different places experience the climate crisis differently. But as Tuvaluan Prime Minister Enele Sosene Sopoaga has said, Pacific islands – which are especially vulnerable to rising seas and all the devastation that comes with them – feel its impacts much more keenly than most places: “Climate change represents the single greatest threat to the livelihoods of the people living on low-lying, vulnerable countries.”

Which Countries Are Pacific Island Nations?

Pacific island nations are considered to be islands located in the Pacific Ocean that are east of both Australia and the Philippines. These islands span as far west as Papua New Guinea and as far east as Easter Island. Sometimes this region is referred to as Oceania – which also includes island continent Australia.

These islands are often grouped into three ethno-geographic regions: Micronesia, Polynesia, and Melanesia. You’ve probably heard of New Zealand, Samoa, and Hawai’i, but (as you can see in the map below), there are many more countries in the region. 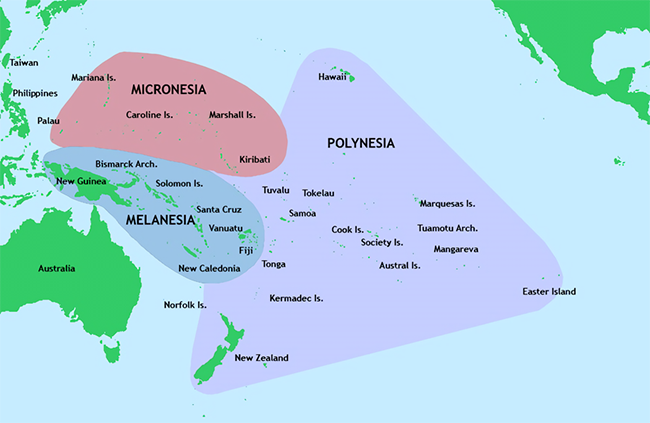 Here’s the climate reality: As humans burn more and more fossil fuels, we’re releasing heat-trapping gases like carbon dioxide into our atmosphere. That means we’re experiencing warmer temperatures both above water and below it.

On Land: In 2018, the Oceania region endured it’s third warmest-year on record, with temperatures 2.1 degrees Fahrenheit (or 1.2 degrees Celsius) above average. It might not seem like much, but a small change in temperature can really disrupt systems we depend on to survive. After all, think of the difference between 33 and 32 degrees Fahrenheit (1 and 0 Celsius).

In the Ocean: Things aren’t just getting warmer above ground as humans continue to burn fossil fuels. Ocean temperatures are also rising, with “temperatures from the surface to a depth of 660 feet rising by as much as 3.6°F” in the Pacific region, according to the US National Climate Assessment.

That’s because our oceans are absorbing much of the extra heat in our atmosphere – with new ocean heat records set again and again. Many kinds of marine life – from coral to fish – struggle to adapt to the warmer water and often die. This has devastating impacts on coral reefs, fisheries, and resources that Pacific Islanders depend on to survive.

According to the Secretariat of the Pacific Regional Environment Programme (SPREP), “Pacific Ocean-based fishing and tourism provide USD $3.3 billion to the national economics of Pacific countries and territories.” Just like on land, ecosystems depend on a stable climate to survive – and our economies with them.

Here’s the climate reality: Sea-level rise is an undeniable and existential threat for the people who live on islands in the Pacific.

While it’s bad enough that seas are climbing around the world, the Pacific region is seeing seas rise much faster than the global average. There’s a very real threat that these islands could be swallowed up by the sea – in fact, some already have been.

Here’s the stark choice that one low-lying Pacific island nation faces: either relocate or elevate. The Republic of the Marshall Islands (which consists of 29 atolls made up of over 1,200 islets) is considering whether to relocate all 55,000 of its citizens (making them climate refugees) or to build one elevated island and consolidate its population there.

As Marshall Islands President Hilda Heine told former US Vice President Al Gore during the 2019 24 Hours of Reality global broadcast, “[By] 2030, we’re expected to be underwater. So, it is our livelihood. It is the very existence of the Marshall Islands that’s at stake.”

And the number one cause of sea-level rise? Climate change. As we’ve explained in earlier blogs, rising temperatures are directly linked to rising seas in two main ways:

>> Related: Get the facts about sea-level rise in our free fact sheet <<

Here’s the climate reality: Climate scientists expect that hurricanes around the world will become more intense due to climate change. Because of geography and sometimes-limited resources, Pacific island nations are already especially vulnerable to these disasters.

As climate scientist Dr. Michael Mann told Climate Reality, “For a long time, we’ve understood, based on pretty simple physics, that as you warm the ocean’s surface, you’re going to get more intense hurricanes. Whether you get more hurricanes or fewer hurricanes, the strongest storms will tend to become stronger.” Think of a hurricane like an engine and warm, moist air as its fuel.


For Pacific island nations, hurricanes (or as they’re known in the region, tropical cyclones) are already a very real threat. In 2015, Tropical Cyclone Pam hit the Republic of Vanuatu and devastated the nation. It’s considered one of the worst disasters in the country’s history and damages cost the equivalent of 64 percent of the country’s 2016 GDP.

This isn’t supposed to happen. As Kiribati’s then-President Anote Tong said in 2015, “When you're on the equator, it's supposed to be in the doldrums. We're not supposed to get the cyclones. We create them, and then we send them either north or south. But they aren't supposed to come back. But for the first time, at the beginning of this year, the Cyclone Pam, which destroyed Vanuatu, and in the process, the very edges of it actually touched our two southernmost islands.”

Many small island nations have limited capacity to respond to and recover from natural disasters like this. As hurricanes are projected to become more intense due to climate change, Pacific island nations will be especially vulnerable to their wrath.

Oof. That felt a little bleak, didn’t it? A lot of not-so-great news. But here at Climate Reality, we believe in climate hope. That’s because we aren’t powerless to stop climate change in the Pacific islands or anywhere else. The solutions to this crisis are available today.

Like you, for one. And thousands of people like you. To date, we’ve trained more than 17,000 people across the globe to fight climate change at home. These people – Climate Reality Leaders – have been instrumental in pushing cities to embrace renewable electricity, organizing national youth climate strikes, and so, so, so much more.

This August, we’re headed to Minneapolis-St. Paul to train our latest class of Climate Reality Leaders to take action in Minnesota and beyond. Will you join us?

Climate Reality Leaders come from all walks of life. But they all share the same desire to make a difference and help create a sustainable future for the Earth. And we want to see you at our next training in Minneapolis-St. Paul. Learn more and apply today.