We’re with you: Trying to understand the climate crisis can seem a little intimidating at first. If it’s been a minute since you were in science class and don’t spend every day following every development, it can feel like there’s so much to learn and get your head around. Plus, it all seems so, well, big.

We’ve all been there. The good news is that it all basically boils down to a simple fact: Burning fossil fuels on a massive scale causes global temperatures to rise, throwing our climate out of balance and unleashing all kinds of destructive impacts.

There’s more to it than just that, of course. (Just a little.) So we’ve put together a short guide to the key terms for understanding what’s happening to our planet – and knowing how you can help solve it.

Get these terms down (and they’re a lot simpler than they sound) and you’ll get the Big Picture of how we got here and how we move forward to solve this crisis.

Here’s what you need to know:

A story of global cause and effect.

For being the force transforming the Earth and every aspect of our lives, climate change is – at its heart – a pretty simple story of cause and effect.

In a nutshell, climate change is the phenomenon of the cumulative and long-term shift in weather patterns over many decades. Rising average temperatures across the planet (frequently called “global warming”) are one result, but just one of many (more on that below).

The primary culprit in climate change is burning fossil fuels, which leads to more heat in the atmosphere than the Earth can safely handle as explained a little later. This extra heat causes average temperatures to rise across the planet and in our oceans, which disrupts our seasons and all kinds of natural processes. 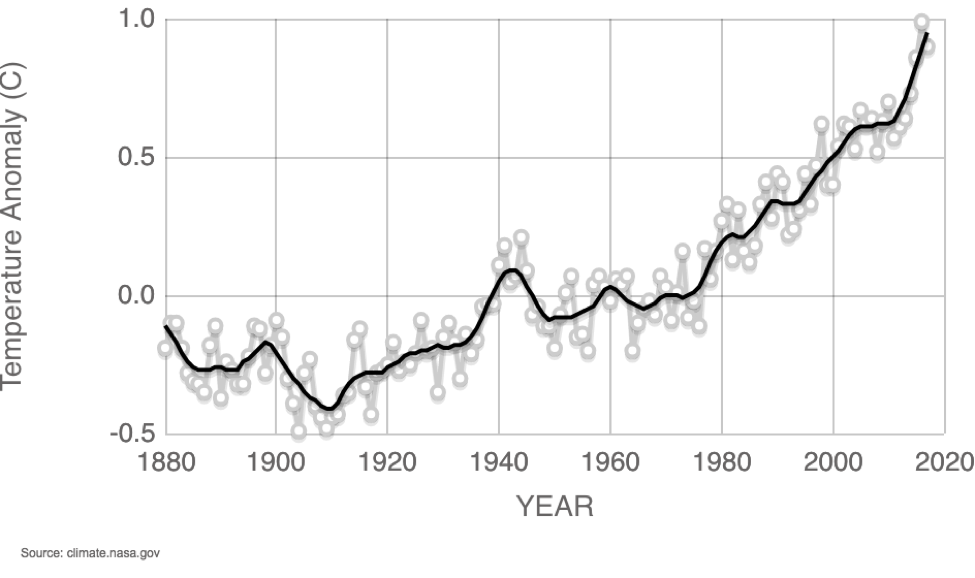 We don’t have to look far to see the results. Warmer oceans mean storms are growing more powerful and destructive. Warmer air and sea temperatures are melting glaciers, causing seas to rise further up our coasts. The extra heat also means droughts are lasting longer and fueling more deadly wildfires. The list goes on and on, creating a climate crisis around the world – and it’s all connected.

For our planet, the consequences of continued warming and climate change are immense. Our climate will continue to change, but how much is in our hands. Scientists tell us we can still avoid the worst climate impacts if we slash emissions from burning fossil fuels and hold global warming to 1.5 degrees.

The good news: We have the clean energy technology to do it (see below), but we have to act now.

The cause of climate change – and health threat to millions.

Fossil fuels are sources of energy like coal, oil, and natural gas formed by ancient bones (you know, fossils) decaying in conditions of immense pressure over millions of years.

For centuries, humans have burned fossil fuels to stay warm and more recently, to power industrial machines and vehicles of all kinds. On their own, fossil fuels produce energy relatively cheaply and on demand, helping grow our economies for many years.

>> Download our free Climate 101 Fact Sheet: What Are Fossil Fuels?<<

That’s in the past. Today, if we want a healthy and sustainable future to look forward, we’ve got to leave fossil fuels behind and shift to clean, renewable energy.

The first reason is that burning fossil fuels produces carbon pollution and other greenhouse gases that – together on a planet-wide scale – trap more heat than the Earth can handle and drive climate change.

Climate change isn’t the only danger we face from fossil fuels. Just the process of extracting them through activities like mining coal or extracting natural gas releases all kinds of pollution and chemicals into the air and water; chemicals that can contribute to cancer and other life-changing diseases for people living nearby.

Transporting and burning these fuels only continues this process, dumping more and more dangerous pollution into the environment.

And who do you think ends up hardest hit by all this pollution? More often than not, it’s low-income families and communities of color who see fossil fuel facilities built in their backyard. On the ground, this means that in 46 US states, people of color breathe in more air pollution than white Americans every day.

Which means, more often than not, it’s kids in poorer neighborhoods being rushed to the emergency room wheezing thanks to the plant down the block. It’s parents of color asking their doctor about long-term neurological disorders linked to fossil fuels.

This kind of discrimination has been going on for decades – and it’s got to stop.

Too much of a good thing becomes a dangerous thing.

Carbon pollution is the excess carbon dioxide that comes from burning fossil fuels. Carbon dioxide is a natural greenhouse gas that traps heat from the sun in the atmosphere – a phenomenon known as “the greenhouse effect” (see below).

But while carbon dioxide is an essential part of life (for example, plants need it for photosynthesis), there’s such a thing as too much of a good thing.

The excess carbon dioxide becomes carbon pollution that traps more and more heat. This extra heat throws the Earth’s delicate cycles and seasons out of balance, changing our climate and leading to everything from lethal heatwaves to faster-spreading diseases.

Keeping the Earth warm – and now making it too hot.

Ever walk into a greenhouse and feel the how the air trapped inside is warmer than the air outside? The sun shining through the glass walls helps warm the air, while the glass traps most of the heat inside. The Earth works in much the same way.

Every day, the sun shines down about 120,000 terawatts of energy onto the Earth – about 10,000 times what humanity currently uses in all our daily and industrial processes.

>>Read more: What Is the Greenhouse Effect?<<

The Earth absorbs some of this solar radiation as heat in the land and oceans. But the planet’s different surfaces also reflect most of this heat energy back into the atmosphere. Some of this heat escapes back into space, but some is trapped by greenhouse gases like carbon dioxide and methane, wrapping the Earth in a blanket of warm air.

The challenge we face with the greenhouse effect is that the more greenhouse gases filling the atmosphere, the more heat they trap. When levels of these gases rise above what the planet can handle through natural processes like photosynthesis, they trap more heat than is safe, driving climate change.

Number one on the “How we’ll solve this crisis” list.

In practice, “clean energy” and “renewable energy” both refer to sources of energy that use natural factors and forces to produce electricity.

Renewables have a critical role to play in our fight for a sustainable future because unlike fossil fuels, they don’t produce carbon pollution or any other heat-trapping greenhouse gases. Which means they can generate electricity without driving climate change.

There are many kinds of renewable energy, including:

It’s okay to get your hopes up – the world really is making a lot of progress on climate.

Along with the benefit of not fueling climate change, clean energy has the virtue of coming from free and theoretically unlimited sources (we’re looking at you, Sun, just not directly). And with the cost of clean energy technologies plummeting year after year, renewables are on track to be just as cheap – and often cheaper – than fossil fuel energy around the world by 2020.

Another huge benefit? Renewables are huge job creators. Already, renewables put over 10.3 million people to work around the world. Plus, these numbers are expected to just keep growing, with the US Bureau of Labor Statistics projecting that photovoltaic solar installer will be the fastest growing profession between now and 2026.

Knowledge is Power, So Keep Learning

We’re here for you. Join our email activist list and we’ll keep you posted on key developments. The more you know, the more you can do to shape the future you want to see.

Quiz: What Kind of Activist Are You? Read More
What Exactly Are Greenhouse Gases, Anyway? Read More
How Do We Know Humans Are Causing Climate Change? Read More